Juan Matute Guimon "Opened His Eyes and Began to Cry," Responsive during Gradual Wake-up from Coma 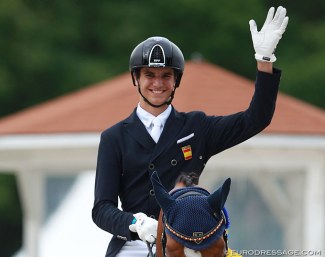 Juan Matute Guimon has shown to be responsive during his gradual wake-up from the medically induced coma he has been in since his collapse and hospitalization after a brain bleed on 5 May.

The 22-year old Matute was twice operated on and two weeks after his second surgery, the doctors at University Hospital Jimenez Diaz in Madrid began to lighten the sedation and gradually wake him up from the artificial coma.

On Saturday 23 May Juan responded to instructions to open his eyes and squeeze his hand. His sister Paula reported on Instagram that "with happy tears in our eyes and the biggest smiles we’ve had in a long time, we are so happy to share with all of you that this morning although he is still sedated, Juan followed instructions, they asked him to open and close his eyes, to squeeze his hand and he did!”

Juan's parents, Juan Matute Azpitarte and his mother Maria, have been by their son's side throughout this struggle for life. On Saturday afternoon they returned to the hospital after hearing the news that their son had become responsive in the morning.

Paula explained that, "as soon as they entered the room and began speaking to him, Juan recognized their voices, opened his eyes and began to cry."

Paula added, "there probably aren’t any words to describe what my parents were feeling in that moment but the doctor did find the words to say Juan is exceeding all expectations.