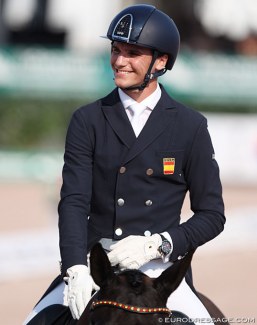 Juan Matute Guimon, the 22-year old Spanish team rider who suffered from a massive brain bleed on Tuesday 5 May, has been transported to the private clinic in Madrid, where a second operation is scheduled to take place tomorrow.

Matute Guimon has been hospitalized at the University Hospital La Paz in Madrid. He was airlifted after collapsing and losing consciousness at his yard 30 minutes outside of the city. He has been in critical condition and in a coma due to a massive brain bleed.

On Wednesday neurosurgeons operated on him the first time, but could not stop the bleeding as the source of the bleed is in a highly sensitive and difficult to reach part of the brain. However, later in the evening the bleeding stopped.

On Thursday Juan's condition was still critical.  A new CT scan was done and, according to Ecuestre.es, an arteriovenous malformation has been identified as the cause of the bleeding. Matute tested negative to Covid 19.

Unfortunately, Juan developed a fever due to inflammation in the brain. This is being treated with medication and it has delayed a second operation.

Today Juan's condition stabilized, but it is still grave.  Juan has been transferred to the University Hospital Fundacion Jiménez Díaz in Madrid for more specialized treatment. A second operation is tentatively scheduled for tomorrow.