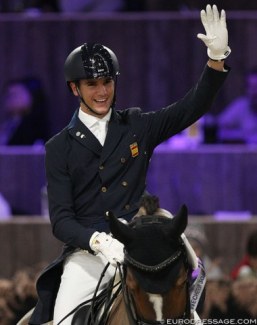 Juan Matute Guimon's second operation to repair the arteriovenous malformation that has caused massive brain bleeding, has been deemed successful.

On Tuesday 5 May Matute was air lifted to the the University Hospital La Paz in Madrid after he collapsed due to a brain bleed. A first operation on Wednesday 6 May could not stop the bleeding, but fortunately in the evening the bleeding stopped.

On Thursday CT scans showed that an arteriovenous malformation was the cause of the bleeding. Matute tested negative to Covid 19.

On Friday Juan was transported to the University Hospital Fundacion Jiménez Díaz in Madrid for more specialized treatment.

Today a second operation, which took seven hours, took place to 'repair' the arteriovenous malformation and it was deemed a success.

Sister Paula Matute reported on social media that "surgery was a SUCCESS with a score of 100%. Now they will keep you at rest one more week so you can recover from the surgery, but the following week you will be back to us all.”

What is an Arteriovenous Malformation?

"A brain AVM stands for Arteriovenous Malformation in the brain and is a tangle of abnormal and poorly formed blood vessels (arteries and veins). AVMs are believed to develop during the development of blood vessels in utero and in the vast majority of cases, they are not inherited. One exception is a very rare condition called hereditary hemorrhagic telangiectasia and those patients have multiple AVMs throughout the body. AVMs occur in both males and females and often are diagnosed between the ages of 18 and 45 years."

"Most AVMs are diagnosed when a patient presents with a seizure or headache and undergoes a brain CT scan or brain MRI that reveals the AVM. However, some patients present with a brain hemorrhage because the poorly formed blood vessels in the AVM are not as strong as the normal blood vessels and therefore are prone to bleeding. In patients with a ruptured AVMs roughly 10 percent of patients will die because of the hemorrhage and of the survivors about 30 - 40% of them will have significant deficits. The amount of brain that is injured from the hemorrhage and the location of the damage in the brain determines the outcome. Hemorrhages in locations such as the brain stem and thalamus generally do worse. Therefore, patients with large brain hemorrhages and those who present in deep coma, have worse outcomes. "

"In ruptured AVMs, the treatment is often microsurgical removal of the AVM with or without pre-operative embolization in those areas of the brain that it is safe to operate on. In those patients with smaller hemorrhages and who have hemorrhages in less eloquent brain do very well and can return to a normal life but in patients with larger hemorrhages particularly in eloquent brain either die or are left disabled. Unruptured AVMs are treated with a variety of treatment options including microsurgery, embolization and radiation. Again, many of those patients will go back to a normal life. The risk of the AVM is the hemorrhage and if treated before they hemorrhage the outcome can be excellent."