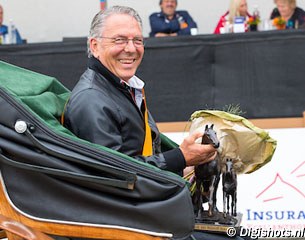 Grand Prix dressage rider, farrier, stallion owner and breeder Leunus van Lieren has been named KWPN Dressage Breeder of the Year 2017 during the KWPN Horse Days in Ermelo, The Netherlands, on Friday 18 August 2017.

The KWPN society chose Van Lieren as breeder of the year for this year because he has now bred his 22nd Grand Prix level competed horse.

Based at Stable Hexagon in Schore, The Netherlands, Van Lieren and his late wife Mieke bred their first successful product with licensed stallion Rubiquil (by Rubinstein) out of keur mare Aquila (by Roemer). Since then numerous Grand Prix horses followed such as Ollright, Zodinde and Double Dutch.

"I absolutely did not expect this," said Leunis, who is always dressed in black. "I'm a bit overwhelmed. I didn't see it coming at all, even when they started announcing my horses. It wasn't until I heard my name that I suspected it. So great!"