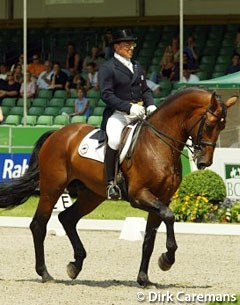 and is keeping him at Van Lieren's place in Schore, The Netherlands, until May. Offield will then train with Van Lieren for a while, before returning to the States with her newest acquisition.

American Karin Offield is based at the Vero Beach Polo and Saddle Club in Vero Beach, FL, during the winter months, but runs her own training stable Brek-N-Ridge Farm with husband Jim Offield and trainer Michael Etherly in Harbor Springs, Michigan.

Hexagon's Louisville, who is bred by Mr. Wouters from Alphen, The Netherlands, was recently nominated for the Dutch Grand Prix B-team, but owner and rider Leunis Van Lieren decided to sell his horse anyway.

"It hurts me to sell this horse, but if you want to run a business you sometimes have to sell. I have to luxury of owning several Grand Prix horses and it was financially a good deal," Van Lieren told the KWPN office.