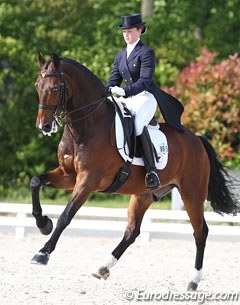 Hexagons Kyrain was bred by Leunis van Lieren and was by Cyrain out of Valente (by Lorenz x First Trial xx). The bay gelding was Van Lieren's first breeding product to reach Grand Prix level.

Kyrain went to become a schoolmaster and competition horse for Dutch junior Jeanine Nieuwenhuis in 2010 and 2011.

"He continued to frolick about and joke with numerous students at Stable Hexagon at old age," Van Lieren stated. "We owe much to him."