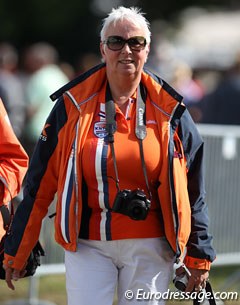 Dressage horse breeder Emmy de Jeu has been proclaimed KWPN Breeder of the Year 2013 during the KWPN Horse Days in Ermelo, The Netherlands, on Friday 16 August 2013.

The Oosterstreek based De Jeu has proven highly to be a highly successful breeder and owner on the international dressage circuit. Eskara de Jeu (by Jazz) became the KWPN Mare Champion in 2012, the 7-year old Asther de Jeu (by Contango) made her small tour debut with a 70% score this year.  Her Grand Prix mare Sisther de Jeu (by Gribaldi) was the last foal her late husband had bought and she became Dutch small tour champion as well as an A-team dressage horse under Edward Gal.

Emmy is also the breeder of W.Esther de Jeu (by Rousseau), who was Friesian regional mare champion. Wench de Jeu is competing at small tour level and her 6-year old Che de Jeu (by Voice) competed last week at the World Young Horse Championships in Verden.

Sisther de Jeu was bred by KWPN Breeder of the Year Huub van Helvoirt and five of her embryos have been flushed and are currently viable in gestational mares.