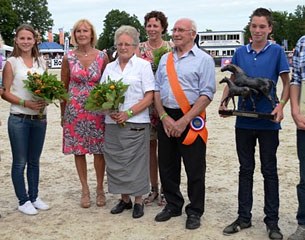 The Van Os family has two mare lines which produced outstanding offspring, including several licensed stallions. Their foundation mare is Diana (by Doruto) which carries the keur, preferent and sport dressage predicates. She produced Zoriana (by Jazz) who was a KWPN Elite Mare Championship finalist and a Pavo Cup participant. In the IBOP test she scored 10 for trot. Small tour horse Uno (by Jazz) comes from this line.

Today the Van Os family was decorated with the Huub van Helvoirt Cup for being the KWPN Dressage Breeders of the Year.