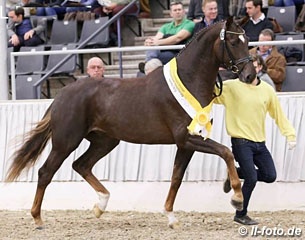 The 6-year old breeding stallion Quantensprung has stamped the 2016 Hanoverian Stallion Licensing in Verden, Germany, with his first crop of offspring. All five of the selected sons were licensed, three were named premium stallions and all three of them became the best sellers of the auction.

The Hanoverian society no longer proclaims a licensing champion, but based on the prices fetched at auction the Quantensprung get dominated this year's Hanoverian licensing for sure.

The stallion licensing committee was in a very generous mode, approving no less than 53 of the 84 presented stallions. Ten of them were proclaimed premium stallion of which six were dressage bred. A huge total of 33 dressage bred colts was licensed. 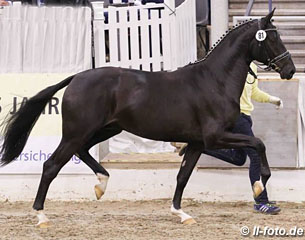 There was a bit of commotion around the black Dancier x Wolkenstein II x Eichendorff, bred by Volker von Holten. This colt turned up unlevel on the day of the licensing, but was allowed to reappear in the ring an hour later, sound. He was licensed and got a premium. He sold for 200,000 euro at auction to Blue Hors stud in Denmark.

The other two premium stallions were Willi Gering's Best of Gold x Sungold x De Niro, which sold for 120,000 euro to Gestut Tannenhof and the tall liver chestnut Dimaggio x Jazz Time x Escudo I, which is owned by Gestut Bonhomme and was not offered for sale. 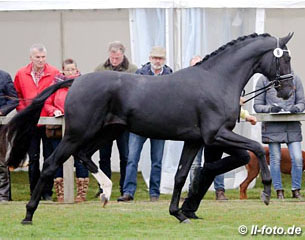 The licensed stallion and one of the crowd favourites, the black colt Ferretti (by Funtime x Londonderry), sold for 120,000 euro to Lone Boegh Henriksen in Denmark.

The average price for a licensed stallion was 62,687 euro. The most expensive, non-licensed dressage stallion was a Don Nobless x Furst Heinrich, which sold for 38,000 euro. 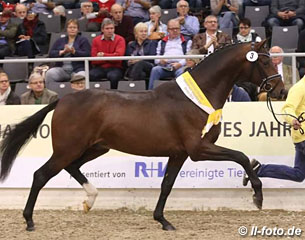