His Highness, 2002 Hanoverian Licensing Champion, Sold to the United States 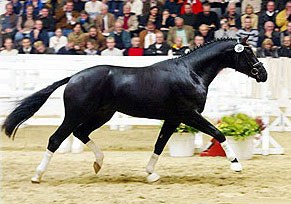 At this year’s Hanoverian Stallion Licensing in Verden, the sensational price of 515.000,- EUR was paid for a Hohenstein/Donnerhall-son. Under thunderous applause, the impressive black horse left the Niedersachsenhalle as the winning stallion.

The breeders Struck and Landgraf, Peine, bred the extremely noble stallion with the marvellous basic gaits. He was exhibited by Heinrich Gießelmann, Barver, who could repeat his last year’s brilliant success. Douglas W. Leatherdale from the United States bought the equine jewel. He is the chairman of the American Hanoverian Society and will put the stallion at Hanoverian breeder’s disposal at Jens Meyer’s breeding station in Dorum.

A chestnut stallion by Rubinstein/Weltmeyer (breeder and exhibitor: E. Hennings, Petershagen) with exceptional basic gaits was the first reserve winner. He was sold at 120.000,- EUR and will be stationed in Lower Saxony. A thoroughbred offspring became second reserve winner: the Celle State Stud bought the bay by Windhauch xx/Fabriano (breeder: A. Meyer, Dedelsdorf – exhibitor: K. Bünger, Oetzen) at 30.000,- EUR.

A Graf Top/Drosselklang II-son (breeder: W. Cording, Wagenfeld – exhibitor: R. Waering, Stemwede) was this year’s best show jumping stallion and awarded the Winergy-prize. A Lower Saxonian private stallion owner bought him at 80.000,- EUR. Cord Wassmann, chairman of the licensing committee, responded positively to the quality of the stallions born in 2000. "The winning stallion outshined the whole collection, but the other stallions were of above-average quality as well."

The 49 licensed stallions were sold at an average auction sales price of 42.693,- EUR. This was a better result than the average price achieved last year. Dr. Burchard Bade, the manager of the State Stud, bought 11 stallion prospects. Buyers from foreign countries purchased totally 15 stallions.

The auction of non-licensed stallions ended with a satisfying result as well: the 40 two-and-a-half-year-old prospects were sold at an average sales price of 12.725,- EUR. Prices between 5.000 EUR and 48.000,- EUR were achieved.

The Celle state stud stallion Warkant by World Cup I/Grande, bred by Helga Axhausen, Schiffdorf, was awarded "Hanoverian Stallion of the Year". As a reward for this, the breeder was honoured with a valuable statue as well as with a cheque for 10.000,- EUR, donated by the "Uelzener Versicherungen".