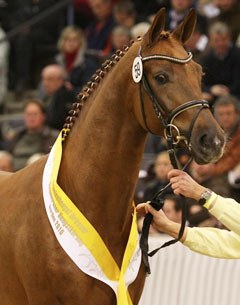 The 2010 Hanoverian Stallion Licensing in Verden came to a conclusion with 46 licensed stallions and 16 premium stallions, of which ten were dressage colts. After dropping the tradition of proclaiming a licensing champion, the Hanoverian society shot itself in the foot

and now has to rely on the buying the most expensive stallion at auction to generate the publicity to cash in the breedings.

That's exactly what Axel Brockmann did. The director of the Lower Saxon State Stud in Celle acquired the bay Spörcken (by Sir Donnerhall x Lauries Crusador xx x Weltmeyer x Bolero (video top right corner)) for the top knock down price. The elegant bay stallion, who did not even make it to the premium ring, sold for 300,000 euro. This young colt is bred by Benedicte Meyer from Luxembourg and was presented at the licensing by Detlef Ruddat.

The highlights of the 2010 Hanoverian Licensing included four premium stallions. The crowds loved the powerful trotting premium stallion Conen (by Chequille x Landclassic x Grandenstern), which was presented by Johannes Westendarp and I Derichsweile and who sold to a Hamburg based dressage rider for 190,000 euro. The dark bay colt has a super engine from behind but is slightly croupe high. 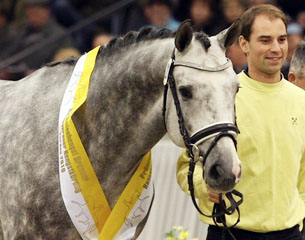 Another star of the collection was Bonard de Charry (by Brentano II x Donnerhall x Lauries Crusador xx). This liver chestnut stallion impressed in hand with his engaged hind leg and beautiful model. He sold for 120,000 euro to France. Some spectators considered the grey Del Magico (by Dimaggio x Feinbrand x Akzent II) the best mover of the entire licensing. He sold for 200,000 euro to Austria.

The most expensive show jumping stallion was the Italian owned premium stallion Satisfaction III (by Stakkato x Calypso II). The Russian client acquired him for
140,000 euro. 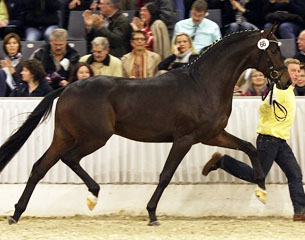 The most expensive, non licensed stallion was Foundation (by Fidertanz x De Vito) bred by Gerd Pigge. He sold for 95,000 euro to Paul Schockemöhle, Katrinelund and Priess Stutteri.