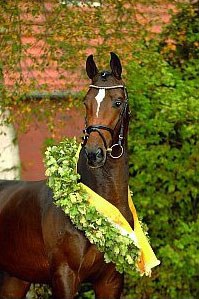 German equestrian magazine St. Georg reported that the German Hanoverian Verband has decided to abolish the title of "Licensing Champion." In a bureau meeting, a majority of the Hanoverian board decided upon removing the proclamation of a champion

The Hanoverian verband is the biggest warmblood breed society in the world and will as of next year only have a "premium ring" which will be offered for sale at auction the next day of the licensing. No more champions such as Soliman de Hus, Lauda, Hotline, Dancier, His Highness (pictured). Soliman de Hus (by Sandro Hit x Donnerhall) was the last Hanoverian stallion to have received the title of Licensing Champion.

The Hanoverian Verand aims to discourage breeders to choose simply for the licensing champion and it aims to broaden breeders' interest in a more divers group of stallions. Hanover also wants to draw more attention to the mare families by giving them a number, just like the Holsteiner Verband does. The Trakehner and Oldenburg verband refer to mare families.

The question now posed is whether commerce and not quality judging will decide who the licensing stallion. Is the most expensive stallion at the auction going to be the "inofficial Licensing Champion" of the year?