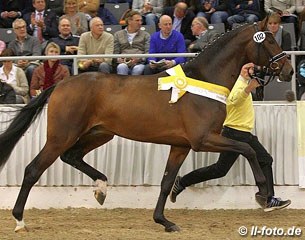 The young Westfalian bred colt Revolution claimed the spotlight at the 2015 Hanoverian Stallion Licensing in Verden, Germany, on 22 - 24 October 2015. Sixty colts were licensed, fifteen were named premium and the Rocky Lee x Roulette sold for a record price of 1,2 million euro.

A total of 106 stallion prospects out of a group of 110 pre-selected colts were presented for licensing with the Hanoverian verband in Verden. A generous amount of sixty  received a positive verdict and fifteen of them received the premium status. The Hanoverian society no longer proclaims licensing champions so the crowd favourite or top seller at the auction usually turns out to be the "licensing champion".

This year, all attention went to the bay Westfalian bred premium colt Revolution (by Rocky Lee x Rouletto x Wendenburg), bred by Yasemin Yanik in Essen, Germany and owned by Detlef Ruddat from Kirchlinteln, Germany. Andreas Helgstrand let the hammer fall at 1.2 million euro at the auction following the licensing. Helgstrand acquired the stallion in partnership with Hanni Toosbuy Kasprzak and Søren Grønborg. It is the first time that a one million euro price was called at an auction in Verden. The Oldenburg society in Vechta already set the record of 1.1 million euro with a Le Champ Ask in 2008. The previous Hanoverian licensing auction price highlight was Hotline selling for 800,000 euro in 2005. Auction prices with all breed societies, however, have to be taken with a grain of salt as sometimes stallions are already sold beforehand in a private deal and the auction price is just a façade.

The best show jumper of the licensing was the bay colt with another Westfalian sire Comme Il Fout (dam sire Calido), bred by Antonius Schulze-Averdiek. He sold for 65,000 euro to The Netherlands.

Another crowd favourite was the Rhinelander bred Dow Jones HC (by Don Frederic x Fidertanz x Sandro Hit), bred by Johannes Baumeister and presented by Tobias Schult. He sold for 220,000 euro to Belgian Anemone Samyn from HC Stables but the stallion will stay with her coach in Germany.

The other premium dressage bred stallions were 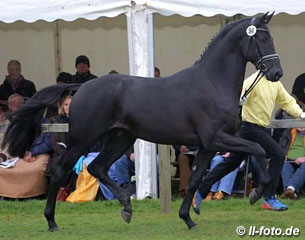 The black colt Million (by Millennium x Farewell III x Warkant) got licensed but he did not get the premium status. Bred by Walter Droege and owned by Heinrich Ramsbrock, this colt still sold for 230,000 euro. The licensed Rhinelander bred Fiamingho MS (by Furstenball x Lord Sinclair) sold abroad for 130,000 euro. This dark bay is bred by Nicola Giesen, the 2001 and 2002 European Young Riders Champion.

The average price of 68,836 euro for a licensed stallion was much higher because of the one million euro stallion is not really representative therefore. The non-licensed stallions  achieved an average auction sales price of 17,071 euro.