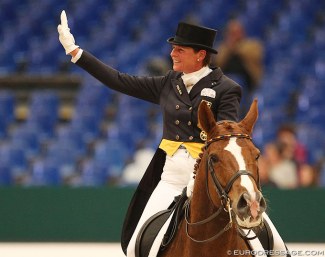 German Grand Prix rider Ulla Salzgeber (née Helbing) made her first claim to fame becoming the 1977 European Young Riders Championship. She became the world number one with super star Rusty. She won two team golds, one individual silver and one individual bronze at the 2000 and 2004 Olympic Games. She rode at the 1998 and 2002 World Equestrian Games where she got double team gold and one individual bronze. She showed at the European Championships in 1997, 1999, 2001 and 2003 (four team gold, two individual gold, one individual silver. She won the 2001 and 2002 World Cup Finals. With Herzruf's Erbe she returned to the 2011 World Cup Finals. She acted as dressage training adviser to the Australian team from 2005 till 2006. Salzgeber now focuses on training and coaching.

My Mum always falted  my pocket square for my tail coat perfect for every single competition. That was always my good luck chuck.

Meryl Streep- a person with a great attitude who cannot be pleasingly bent and twisted. And she is a wonderful actress.

Winning my first Gold medal at German Championship in Balve with Rusty, a very long time ago

Damn rain in Bavaria, so no sunbath today, even though we need the rain so desperately.

Always being straight forward, even if i know a loop sometimes would make things easier.

My daughter, my students and my animals

Happiness in my life and great moments having  success with my horses and students.

Having unhappy people around me - life  ist too short to be unhappy!

My life, especially teaching and riding

Moving from the North to the South of Germany

Loosing the individual Gold Medal in Athens by 0.03%

Living in a sunny country close to the sea.

Being a team member representing Germany and all the positive results of my students all over the world.

Where I am right now - at  my beautiful  home

I think I have enough power

Death of my mum

Car accident as a child on my way home from school

As the person I am - giving 100% for true friends and my passions.