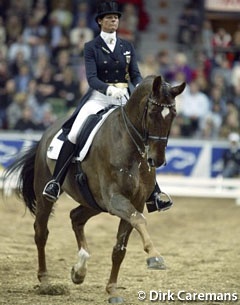 Ulla Salzgeber's Rusty has been tested positive to doping at the 2003 World Cup Dressage Finals in Goteborg. The horse's urine, which was analyzed right after the Finals,

was positive to the hormone testosterone. The results of the B-test of the urine are not yet known. If they prove to be positive as well, Ulla Salzgeber will be suspended from competition and 'abdicated' from the German A-team.

The German Equestrian Federation and Ulla Salzgeber clarified the situation in an official press release. They explained the situation as follows. Salzgeber's veterinarian Hans Stihl treated Rusty with a testosterone based ointment for a skin disease on March 14, 2003. This treatment took place in the absence of Ulla Salzgeber, who was at the time competing at the CDI Dortmund with Wallstreet. German dressage team vet Bjorn Nolting was not informed of this treatment by Mr Stihl, even though Nolting and Stihl uphold a strict reciprocal communication. Mr Stihl knew that Rusty would be competing in Goteborg and was aware that he would be tested. Stihl did not expect that the substance of the ointment would be functioning at the time of the World Cup. Dr Stihl is a highly respected veterinarian and has been treating Rusty for more than seven years.

Ulla Salzgeber is shocked by the news. "My world has collapsed. Only one year ago I publicly reacted against doping and now I am being accused of using it. Everything I worked and fought for the last eight years is now being questioned. All results that I achieved with Rusty, are now being put in a different perspective. I was fully aware that Rusty would be tested on doping if I won the World Cup Finals, so it would have been crazy of me to manipulate the situation right before the Finals. And even if Rusty was not healthy for the Finals, I could have taken Wallstreet who also qualified for the Finals. It is my only option to do everything I can in order to clarify the situation."