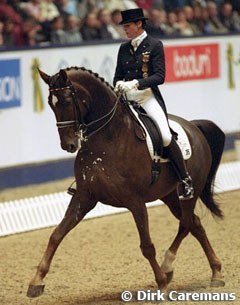 Never before did a combination start as such a favourite for the title, than Ulla Salzgeber and Rusty at the 2001 World Cup Finals in Aarhus, Denmark. Winning two World Cup Qualifiers with Rusty and two with Wall Street

, Ulla Salzgeber lead the rankings with 12 points in advance to second placed Gonnelien Rothenberger. Ulla Salzgeber has taken over is the new Anky, the new Isabell, and she herself realises this the most. "I actually planned to stop riding competitions, but when I bought Rusty, I knew that this was the horse which would bring me to the top," Salzgeber said in an earlier interview. Ulla Salzgeber realises more than ever that she is now the supreme god Odin in paradise Walhalla of the dressage world.

The heated arena of the Vilhelmsborg Equestrian Centre fenced riders and spectators from the cold outdoor temperatures. In the arena, it was actually the show with the world's best riders and horses that heated the ring. Ulla Salzgeber rode an impeccable Grand Prix test scoring 75.05%. Rusty inherited power and elegance radiated from his body and shaded the light snatching of the right hind leg in piaffe and passage. His freestyle, a version of her bronze medal winning kur at the Olympics, was magnificent. Rusty once again excelled in his flying changes and gorgeous pirouettes and the snatching was even less than the day before. The performance put 81.24% on the score board and gave her the absolute victory in the 2001 World Cup Finals. 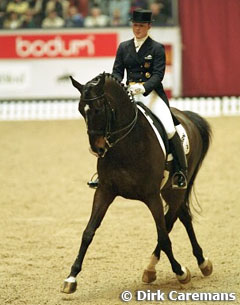 Isabell Werth's top placement in the FEI Dressage Riders Rankings was uncertain after the retirement of her top horse Gigolo. Although everybody knows that she has a barn full of Grand Prix horses which can fill up a single nation's team, the question remained if one of them would fulfill her dream to rise to the top once more? The black Hanoverian Trakehner Antony FRH (by Argument) is known for his temperamental behaviour and recurrent blocking in the piaffe in the middle of a test. Due to Olympic hustle, Anthony disappeared in the background for a while, but the nicely marked black is now completely back. And what a re-enterance did he make! Never before did Isabell Werth push Antony's limits like at Aarhus. The black flowed over the footing of the Vilhelmsborg arena; he was electric, he was there and he did everything!

Although her 71.95% rewarded Grand Prix test didn't please Werth as much (due to the glitches in the tense walk and mediocre piaffe), it was her freestyle which made her cheer up. Dancing on Beatles music, Antony showed his brilliance to the technically most difficult freestyle. The extended canter into double pirouette, followed by extended canter into piaffe pirouette were phenomenal. The score was totally deserved and Isabell Werth seemed extremely pleased with her entree in Denmark. 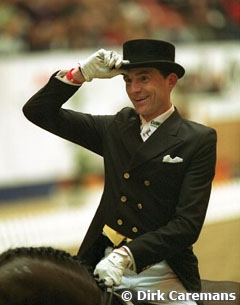 While at last year's Final in Holland, the podium was completely orange coloured with Anky van Grunsven (1), Coby van Baalen (2) and Arjen Teeuwissen (3) as winners, it were the Germans that wielded the axe power on stage in Denmark. Rudolf Zeilinger completed the podium with a final third place. His Grand Prix test was flawless (72.54%), clearly showing his master's, Willi Schultheis, professional techniques in which weight determines the fluency of the movements. Livinjo's half passes were melted into the whole and the Hanoverian kept a steady forward rhythm throughout the test.

Rudolf Zeilinger, who is the official trainer of the Danish Dressage team, rode to heavy rock music and his test showed technical complexity as well. Nevertheless, the 12-year-old Livinjo is not as flashy as Anthony or Rusty and both rider and horse had to be pleased with the third position. "I think that Livinjo ran an exceptional test but it wasn't enough to take the lead. Nevertheless, I'm very pleased with his performance," Zeilinger commented afterwards.

Petersen and Rothenberger Join The Elite 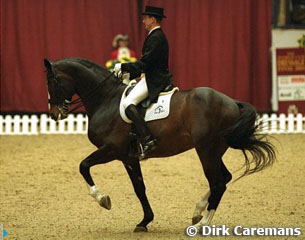 Closely following the footsteps of elite riders Salzgeber, Werth and Zeilinger were Danish Lars Petersen and Dutch Gonnelien Rothenberger/Gordijn. Petersen aboard Blue Hors Cavan (Hanoverian by Cavalier) made a few errors in his Grand Prix -- Cavan broke into canter in the extended trot and piaffe -- but overall showed a great piaffe/passage tour and some wonderful tempi's. In the freestyle Petersen wowed his home country's audience with gorgeous flying changes on the circle, and all this to cheery saxophone music. A very funky kur for this funky gelding who has been acclaimed as one of the top dressage horses on the scene since 1998.

Gonnelien Rothenberger/Gordijn is biting back at Dutch Dressage. This temperamental Dutch rider felt profoundly disappointed after not being selected for the 2000 Olympic Games, even though she had an higher score average than other team members who did go to Sydney. However, now she's taking revenge. Gonnelien Rothenberger was the only Dutch rider able to come to Denmark as her horses are stabled at Gut Ehrenhof in Germany (no transport prohibition due to FMD). For the World Cup Final she chose Jonggor's Leonardo da Vinci, an Oldenburg gelding by Landadel, and for the CDI programme in Aarhus, Gonnelien saddled her husband's stallion Jonggor's Weyden, a Hanoverian by Western Star. Leonardo is very sensitive mount which took her three years to get his complete trust. Scoring 69.27% in the Grand Prix and 74.55% in the freestyle, the combination is now officially joining the elite group of riders on the international dressage scene 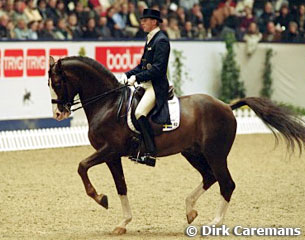 Representing Sweden were Jan Brink and his routinier Bjorsells Briar. The 10-year-old Swedish stallion by Magini x Krocket is sometimes a little pushy against the hand, but overall seems to be an excellent, reliable competition horse. In the Grand Prix the duo gathered 68.24% and his Latino inspired freestyle gave them 73.79%. A very nice sixth place for this Swedish combination.

Australian Kristy Oatley/Nist has fallen in love with her Hanoverian gelding Rosemount Wall Street. This sensible Weltmeyer descendant, purchased at the stables of Colombian Dr. Cesar Parra, is the dazzling underdog of the scene. At the Olympic Games, Oatley/Nist was the best Australian competitor staying right behind the German/Dutch/American delegation. Even in Europe, the former European Young Rider Champion has something to say in the circuit. With 71.17% in the Grand Prix and 71.71% in the freestyle -- Wall Street spooked at the tv camera. Kristy is employed at Karin Rehbein and Otto Schulte-Frohlinde's Gestut Gronwohldhof in Germany. 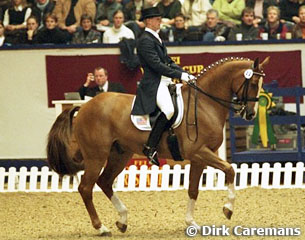 Tom Noone of Abington, MA finished in tenth place onboard Fresco, owned by Francine Weiner-Govostes, finished with a score of 65%.

Noone traveled to the World Cup Final with the assistance of a $10,000 United States Equestrian Team (USET) travel grant. The USET also supplied him with saddle pads, coolers and other equipment.

At his third indoor show ever with Fresco, Tom Noone had a decent, clean 65.84% ride in the Grand Prix. However, some problems arose in the freestyle for the 28-year-old Noone. His elegant Westfalian lost his consistency and was extremely tensed. Fresco fell out of canter once and blocked completely in one transition to the piaffe. Their final score was 65.84% and put them on an overall tenth place.