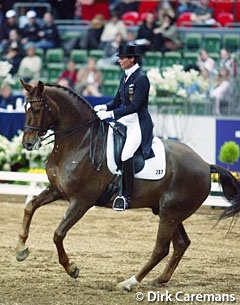 Riding on their one and only freestyle, the Carmina Burana, Salzgeber and Rusty showed one of the her highlight rides of her career- at the 2003 World Cup Dressage Finals in Goteborg, Sweden.

Absolutely flawless in every exercise and excelling in his lateral movements, pirouettes and flying changes, Rusty scored 82.19%. OK, his right hind leg was still lifted up a bit higher than his left hind leg, but balance, suppleness and impulsion stayed constant and that's why his score was only 82% instead of 83%.