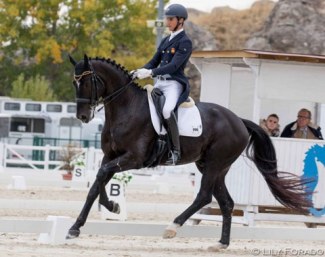 Copernico is a 10-year old Oldenburg gelding by San Amour out of Gestiane (by Don Gregory). He is bred by Oliver Kotschofsky.

Juan Matute Azpitarte discovered the gelding at the 2015 Oldenburg Spring elite auction and purchased him for 27,000 euro. The horse was originally named Santiago but at the auction he sold with the name "Schoschofky."

The horse made its international show debut as a 6-year old under his son, Juan Matute Guimon, at the CDI Wellington in March 2016. The pair won the three out of four young horse classes.

In 2017 Juan and Copernico represented Spain at the 2017 World Championships for Young Dressage Horses and placed 19th in the consolation finals for 7-year olds.

In 2018 the horse competed a season at Young Riders level in Wellington, as well as CDi's in Segovia and  Ponte de Lima. They capped off the season winning the 2018 Spanish Developing Prix St Georges Horse Championship.

Copernico has now been sold as a future Grand Prix horse for German B-squad rider Lisa Müller, who trains with Isabell Werth.

"I’m super proud that you will be going to one of the very best barns in the world," Juan Matute Guimon posted from the hospital, where he is recovering from a brain bleed. "Best of luck dude!"

Lisa Müller told Eurodressage that she "will make future plans with her horses without pressure and in all peace and quiet."