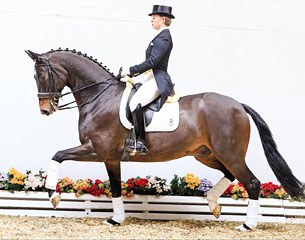 The Hamburg based Renate Weber acquired Let's Kiss for 170,000 euro.

The chestnut Fuchsberger (by Fidertanz x Sandro Hit x Karon) became the second most expensive horse of the auction.  Bred by Thorsten Cording and owned by the Spanish syndicate Omnium Consignaciones, this horse sold for 142,000 euro to HC Stables in Belgium and the horse will be ridden by German Anna Fiebelkorn.

A total of 13 Oldenburg bred sport horses sold to America.  The show jumper Cambodia (by Casiro I x Lordanos x Landsieger). An American client paid 100,000 euro for him.

Thirty-nine horses in total were offered for sale at this auction and 22 sold abroad. The average price for a horse was 38,282 euro.