Juan Matute Guimon Extubated, Breathing on His Own, and Sitting Up 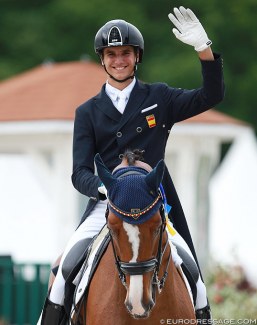 A major step in the recovery process of Juan Matute Guimon has been taken. After being in an artificial coma for three weeks, the 22-year old has recovered enough to be extubated and to breathe on his own.

On 5 May Matute Guimon collapsed, suffering from a massive brain bleed. He was hospitalized and twice operated on for an arteriovenous malformation (AVM) in his left temporal lobe.

Matute was kept in an artificial coma for the brain pressure to decrease and as of 20 May the doctors began to lighten the sedation and gradually bring him back.

On Whitsunday weekend he was finally extubated and breathing on is own. On Sunday he even sat up in a chair for a while.

"Today when mom and dad walked in the room Juan wasn't in his bed, he was sitting in a chair waiting for them with a smile," his sister Paula.

It is yet unclear what the neurological consequences are of the brain bleed. Juan is not yet allowed to speak, even though he wants to, but his reactions make the doctors more than hopeful.  His full rehabilitation will be a long, slow process.

"Although he can't speak yet because of the ventilator, Juan seemed to completely understand what my parents were saying and used his head to answer. his memory also seems to be there as he remembers the situation with COVID as well as the moment of the incident, which he now knows about," she said.