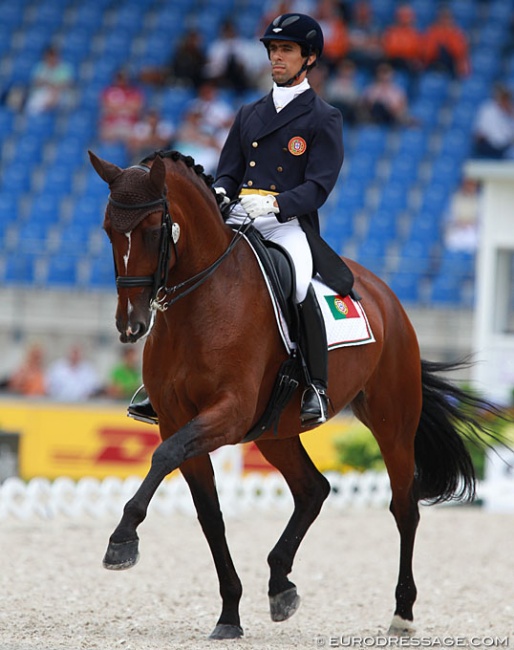 Japanese Olympian Akane Kuroki will be appealing the decision the Eindhoven court took on 3 March 2020, ruling there was insufficient evidence that Batuta suffered from lameness due to a chronic issue to her right front hoof.

Kuroki sued the Portuguese owners in order to get the full purchase price back based on the horse having had hidden defects. She is taking the case to the Dutch appeals' court.

She was initially owned by Coudelaria Herdade das Figueiras when she was competed by Spaniard Jose Antonia Garcia Mena.

In 2014 the mare sold to the Portuguese's company International Sport Horse Investment (ISHI), headed by Mario Franco. The ride was allocated to Gonçalo Carvalho, who competed her at the 2015 European Championships. In March 2015 the mare had tested positive to controlled medication Meloxicam, a non-steroidal anti-inflammatory drug (NSAID) used for the treatment of arthritis and osteoarthritis. It reduces pain, swelling, and stiffness of the joints. Carvalho, at the time, stated that the mare had injured herself on transport and had a swollen hock.

In 2016 Batuta showed at the CDI's in Lisbon, Nice and Jerez, but when Portugal did not obtain an individual slot for the Olympics, Batuta disappeared from the scene to return in October 2016 to win a second, consecutive Portuguese Grand Prix Champion's title.

In March 2017 rumours were running rife that Dutch horse dealer Joep Schellekens had brokered a sale of Batuta to his Japanese client Kazuki Sado, who is also based at Imke Schellekens-Bartels' yard in Hooge Mierde like Akane Kuroki at that time. A pre-purchase exam with X-rays was made on 22 March 2017, but a sale did not happen.

The owner moved the horse to Spain where Sergio Martin Palos took over the ride. He showed her in August and September 2017 at the CDI's in Nice and Saumur and in March 2018 he took her to the CDI Lier, where he was second in the Grand Prix with 71.804% and won the Grand Prix Special

The Lier results renewed the interest in Batuta as Kuroki was urgently looking for a successor for her retired Toots and wanted a hopeful for the Tokyo Olympics.

Joep Schellekens brokered the sale to Kuroki in April 2018. Kuroki test rode the mare in Portugal on 22 March 2018. On 3 April 2018 the mare was vet checked by Dutch veterinarian Jacques Maree, who gave a positive verdict about the new X-rays and her health, yet refrained from looking at the existing MRI images that were made of Batuta before.

Batuta arrived at Bartels Academy on 22 April. Already the next day, Batuta was unlevel in her movements and this was immediately reported to the seller.

On 25 April a new MRI was made in Belgium and the veterinarian there diagnosed her with "Osteoarthritis DIP joint RF with general cartilage thinning (…) Remark: The described findings in de DIP joint date with certainty over 3 weeks. To develop general thinning of the cartilage multiple months are needed, sometimes a year or more."

On 26 May 2018 Batuta developed a colic, was operated on, but had to be euthanized as the damage to her intestines was too great.

During the lawsuit at first instance, it became clear that the Portuguese owners had a well documented history of Batuta's medical status. There were multiple sets of X-rays and MRI's made of the mare in 2017 and 2018.

On 10 March 2017 an MRI was taken of Batuta and it revealed that the right front hoof had overfilling in the joint and irritation of the joint capsule.  On 22 March 2017 X-rays were made for the pre-purchase exam for Kazuki Sado.

On 24 November 2017 a new MRI was made of Batuta's hoof as the mare showed signs of lameness again and the vet diagnosed that she was "Lame Right Front / foot pain caused by: - bursitis navicular bursa, - OA DIP joint, - synovitis PIP joint". Batuta was rested, got medication and new shoeing. In January 2018 she was considered fit again.

On 12 February 2018, Batuta underwent another MRI at the university clinic in Madrid. She was diagnosed with an increased amount of overfilling in the joint and irritation of the joint capsule, as well as a minimal osteophytes of the coronet band, compared to March 2017.

On 3 April 2018 Dutch veterinarian Jacques Maree did the pre-purchase exam for Kuroki, including X-rays and blood test, and gave a positive verdict for the purchase of the mare by Kuroki.

On 27 April 2018 Kuroki formally emailed the owner that she dissolved the purchase contract because of the latent defects that were discovered. ISHI, however contested this, and both parties ended up in court in The Netherlands.

On 4 March 2020 the court in Eindhoven, The Netherlands, returned the verdict and fully denied Kuroki's claim that Batuta had latent defects and was unsuitable for top sport.

The Eindhoven court believed that there was insufficient evidence that the issues to the hoof joint at the moment of purchase would lead to lameness and inability for dressage sport. According to the court the lameness issues in November 2017 were fixed, partly through new shoeing, and the horse was no longer lame after that. Because the horse was not lame during the purchase and at the pre-purchase exam, the court believes Kuroki has no case.

Kuroki has immediately decided to appeal this court decision. She took a new lawyer, Stephan Wensing, to represent her interests and they are now conducting a thorough investigation into the medical history of the mare.

"That verdict in Eindhoven was completely wrong," lawyer Wensing told Eurodressage. "Fifty percent of court decisions at first instance are changed after appeal, especially when it comes to equine law. How much evidence do you need when you can see on the X-rays and MRI's from 2017 as well as from 2018, both before and after delivery, showing exactly the same overfilling in the joint and irritation of the joint capsule."

He continued, "we had an independent vet (Arie Hoogendoorn from equine clinic De Watermolen) look at all the X-rays and MRI's available in the entire case file, including the ones of the pre-purchase exam on 3 April and those of 25 April. Both clearly indicate the same chronic infection of the right front hoof."

Kuroki told Eurodressage, "the unsuccessful outcome was due to my lawyer (W. Reddinghuis), who is working for Bartels Academy and had a clear conflict of interest, which was revealed way too late. If I won the case, Academy (would have) lost their commission (fee). I cannot go into further detail as the case is still ongoing."

The appeal will begin on 23 June 2020 and it will take several months before there is verdict.