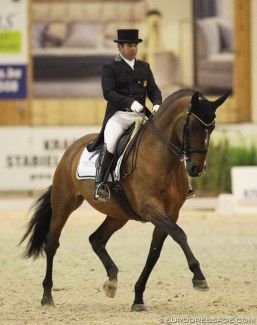 Batuta (by Quixote x Icaro) is bred by Sociedade Quinta das Terras and was initially owned by Coudelaria Herdade das Figueiras who assigned Spanish Jose Antonio Garcia Mena to train the mare to international Grand Prix level. In 2014, Mena could not secure the ride on the horse for the long-term and Figueiras sold her to the Portuguese's company International Sport Horse Investment (ISHI).

Under Portuguese Gonçalo Carvalho Batuta returned to the ring at the CDI Munich in November 2014. At the 2015 CDI Vidauban four months later in March the mare tested positive to controlled medication and her rider had to pay the FEI an administrative sanction. In the summer the pair represented Portugal at the 2015 European Championships in Aachen, where they were 13th in the Kur to Music. They also won the 2015 and 2016 Portuguese Grand Prix Champion's title.

In May 2017 rumours were rife about the sale of Batuta to Japan as a future ride for Kazuki Sado. However, eventually the deal fell through and ISHI sent Batuta to Spain to be trained and ridden by Sergio Martin Palos. This new duo debuted at the CDI Nice in August 2017, where they won the Grand Prix Special. They went on to compete in Saumur in September and then in Lier in March 2018.

Not Kazuki Sado, but stable mate Akane Kuroki returned to try out Batuta with trainer Imke Schellekens-Bartels and they renegotiated a sale. The deal was sealed this week and Batuta has arrived at Bartels Academy in Hooge Mierde, The Netherlands, this afternoon.

"It's beginning of a new my journey," an excited Akane told Eurodressage.

Sado ended up buying Charlotte Dujardin's Barolo at the end of December 2017.