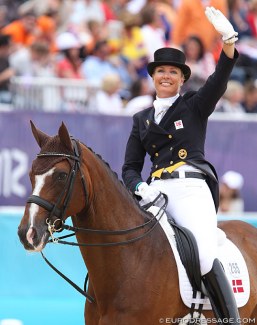 Getting my boxer puppy Snoopy.

SORRY…. I cannot answer this. There are many people I admire from young till old.

To lose my loved ones, and the day that Negro won’t be among us anymore

Perfectionism and, if you ask my husband, I'm control freak

The photos of my parents

Seeing animals, but also older people suffering. That can break my heart.

A lot…they always stayed behind me in my decisions even though they were not always agreeing. I miss them loads

Best friends, and Kevin Costner would be welcome too

Alongside to my studies I did have jobs like in the supermarket, bakery, candy shop etc and they were not always fun, but because they made it possible for me to pay for the livery of my horse. I was doing it with pleasure.

Oh my God, there have been a few, but whats the use of looking back to that now

That I wouldn’t have smoked when I was young

Being a member of the Danish Team in Hong Kong (Beijing) 2008 Olympic Games winning the first Olympic Team medal for Denmark, and of course being participating 5 times in the Olympic Games!

Watch out before you trust people for a 100%

I don’t need to say sorry to anyone, and if I should, I would have done it right away

It makes me smile

At home with my husband, all my horses, dogs, cats and pigs !!

To stop animal cruelty all over the world

Once crossing the street in Aachen during the CHIO, when a bus almost drove over me. Emile Faurie saved my life by pulling me back

As an honest person with love for animals