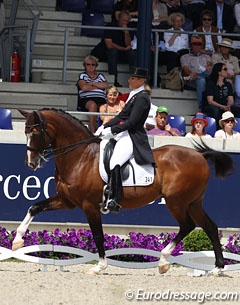 The 12-year old Dutch warmblood Taikoen (by Negro x Rothschild), who recently returned from injury to produce seventy percentage earning rides at the CDIO Rotterdam and Aachen, is unfit to compete at the 2012 London Olympic Games.

An Olympic team bronze medallist in 2008, Anne van Olst will rely on her second horse Clearwater (by Carpaccio x Limebrand), which was also her mount in Hong Kong.

The Danish delegation has been holding their training camp at Kristina Rausing's farm near Windsor, Great Britain, before they moved to Greenwich on the weekend. Taikoen was still fit at the camp. On 25 July Van Olst wrote that "Taikoen and Mr Clearwater are in the best form ever."

Related Links
Martin Dockx and Grandioso to Step in for Delgado, Faberge Reserve
Beatriz Ferrer-Salat Withdraws Delgado, to Ride Faberge
Eurodressage On the Scene at the 2012 Olympic Games