Clearwater Retired from Competition, Sent Back Home to Holland 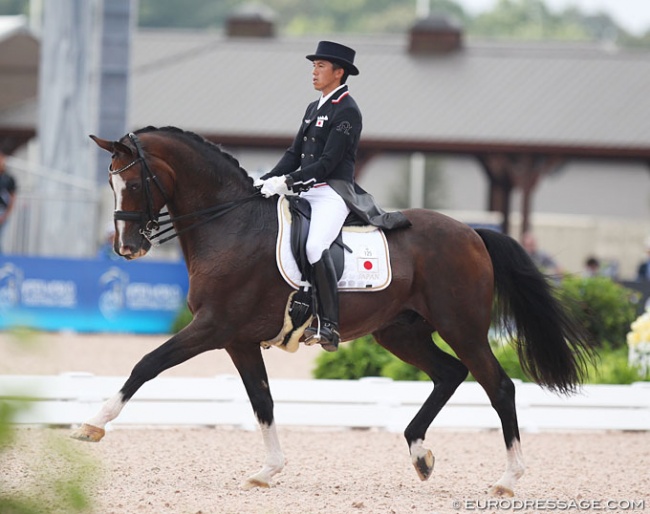 Clearwater, the  20-year old gelding who has competed at international Grand Prix level for no less than 12 years, has been officially retired from competition sport and sent back home to Holland for his retirement.

Clearwater is a Danish warmblood gelding by Carpaccio x Limebrand, owned by the Tsunehiro Shimoda.

The talented bay gelding with an exceptional piaffe and passage has had an illustrous career as an international dressage horse.

Dutch Ton Kies acquired Clearwater after Turin for Dutch based Danish Anne van Olst to ride. She won team bronze with him at the 2008 Olympic Games in Hong Kong and further represented Denmark at the 2009 and 2011 European Championships, 2010 World Equestrian Games and 2012 Olympic Games. They were also the 2011 Danish Grand Prix Champions.

Clearwater then disappeared from the scene, often struggling with niggling injuries, only to return once under Van Olst's assistant rider Charlotte Fry as a schoolmaster in the Under 25 division at the CDI Roosendaal Indoor in December 2015. The pair won two tests in Roosendaal and this peaked the interest of the Japanese in Clearwater.

At the end December 2015 Clearwater sold to Tsunehiro Shimoda in Japan as a ride for his son Akihiro Shimoda, but it was Shingo Hayashi who appeared in the show ring with the gelding. The pair kicked off the 2016 show season early but after the CDI Hagen in April 2016, the horse disappeared again, to return in December 2017 at the CDI Gotemba in Japan. This year the sympathetic bay was fresh and fit and did the CDi's in Hagne, Compiegne, Verden and Crozet. The final international competition for the 20-year old was the 2018 World Equestrian Games in Tryon.

"Mr Clearwater arrived back home today to enjoy his retirement," Anne van Olst stated. "This horse means so much to me and I am so thankful to the Shimoda family, Shingo Hayashi and Norbert van Laak for letting him come back to me. 20 years old! He looks amazing and he is just as naughty and as fresh as ever. Now everyday enjoy the field and teach my young girls how to ride and definitely how not to ride."