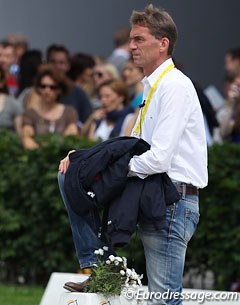 The Danish Equestrian Federation and Danish team trainer Rudolf Zeilinger have announced the Danish combinations that are selected to represent Denmark at the 2012 Olympic Games in London on 2 - 9 August 2012. After the final performances in the CDIO Grand Prix at the 2012 CDIO Aachen, Zeilinger was able to make his final pick.

Zeilinger selected the following riders on the team

Anne van Olst will be able to ride Clearwater (by Carpaccio x Limebrand) as her reserve horse.

The Danish individual combination will be

"These are four strong combinations that we are sending to London," Zeilinger commented. "There are experienced horses and new stars and with them I believe Denmark will be a strong candidate to continue the bronze medal trend of 2008."