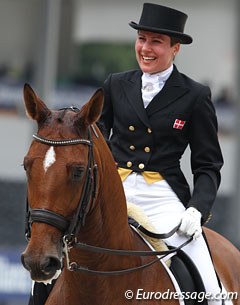 The Danish Equestrian Federation has confirmed that Denmark have been granted a fourth Olympic spot for an individual rider at the 2012 Olympic Games.   Denmark is the fifth country eligble to send one individual combination extra to the Games

, besides The Netherlands, Germany, Great Britain and the U.S.A.

Denmark obtained the extra starting place as Antiguan rider Emily Ward-Hansen, who is based in Denmark with her husband Sune Hansen, was unable to achieve her MES scores aboard Dutch warmblood Picobello (by Ferro).

Denmark will be testing a potential Olympic team in Aachen, the final official selection trial before the announcement of the Danish Olympic dressage team.

While Zu Sayn-Wittgenstein and Kasprzak can already be certain of team selection, the third team spot and one individual spot have not yet been allocated. Riders in the running for this position are Lisbet Seierskilde (Jonstrupgaardens Raneur), Sidsel Johansen (Schianto), Anne van Olst (Clearwater or Taikoen), and Lone Jorgensen (De Vito).

Seierskilde and Van Olst have proven to be in best form in Rotterdam. Johansen has to show her worth in Aachen.