Where are They Now? Horatio 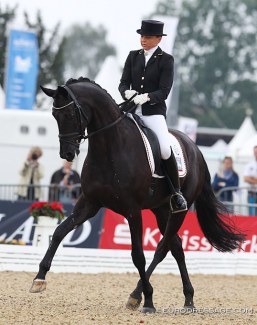 Black and beautiful; that is Horatio. Under Dorothee Schneider the Hanoverian gelding was bronze at the Bundeschampionate and finished sixth at the 2011 World Young Horse Championships. He sold to Sweden as Tinne Vilhelmson's FEI hope, but Horatio disappeared from the spotlight. Where is he now?

Warendorf and Ermelo with Dorothee Schneider

Since he was a 4-year old, the gelding was owned by Sven Rothenberger, who asked Dorothee Schneider to develop the horse.

Schneider trained the young black up the levels. In 2009 they made their show debut at a locak show in Mainz in June. The pair went on to finish 8th at the Bundeschampionate in Warendorf in the 4-year old mare and geldings division.

In 2010 he was short listed as third reserve for the World Young Horse Championships in Verden, but at the Bundeschampionate they collected the bronze medal.

In 2011 Schneider and the pretty black finished sixth at the 2011 World Young Horse Championships in Verden, but did not go to Warendorf that year.

Schneider trained Horatio to developing Prix St Georges level and competed him in the 2012 Nurnberger Burgpokal qualifier in Perl and lastly in Donaueschingen before he sold.

In October 2012 Horatio sold to Swedish Antonia Ax:son Johnson as a future ride for Tinne Vilhelmson. The gelding was picked up at Gestut Erlenhof when Vilhelmson's trailer dropped off Favourit (by Fidermark) as a Grand Prix schoolmaster for Sanneke Rothenberger.

Since Horatio's Swedish ownership the horse has only competed at two more CDI's, in January 2015.

Tinne's assistant trainer Caroline Darcourt competed Horatio at the CDI Wellington in Florida in the small tour, scoring between 65 and 67% in the four tests she rode.

The CDI Wellington in January 2015 was Horatio's last international start. The now 15-year old has been retired from sport.

"Jenna showed him at small tour, but then sadly he got an injury he didn’t recover from," Tinne Vilhelmson told Eurodressage. "He's retired now and goes on our big fields together with our other oldies."