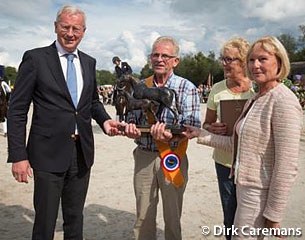 Long time Dutch warmblood breeder and stallion owner Jan Lamers has been named 2014 KWPN Breeder of the Year at the KWPN Horse Days in Ermelo, The Netherlands, on Friday 15 August 2014.

Lamers had two licensed stallions out of his mare lines at the 2014 KWPN Stallion Licensing and produced a plethora of successful sport horses at his brood farm and stallion station.

Lamers and his wife Marie José were honoured today in Ermelo for their impressive career as KWPN breeders.