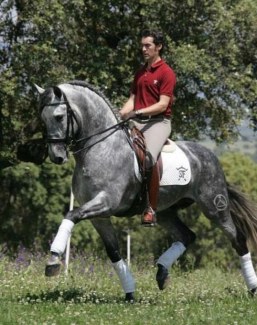 - by Lily Forado for USPRE

The word “elite” comes from the French word élite, and this from Latin elegere (“to choose” or “to select”). In the PRE Stud Book, there are only six stallions that enjoy the distinction Elite. From now on, Kabileño VIII, bred by Yeguada Marín García and owned by the American Stud Farm, Rancho el Marengo, joins this select group of stallions.

Since the launch of the PRE Breeding Program at the beginning of the 21st century (2004), several stallions have marked a before and after. Ermitano III, bred by Yeguada María Fernanda de la Escalera y de la Escalera, was the first stallion to receive the Elite distinction.

According to the definition of ANCCE, Elite stallions are those of 7 years of age and older, which have achieved the category of Improver Breeding Stock for Morphology for Dressage and for Dressage. In other words, they are animals that throughout their work as stallions have brought qualities, but above all, they have created a great lineage and line thus maintaining the evolution and improvement of the P.R.E.

Kabileño VIII has written a page in the history of the P.R.E. The son of Pampero VII joins the select group of horses of the Pure Spanish Breed with this distinction of Elite; such as Ermitano III, Evento, Utrerano VII, Impaciente II, and Cacique IX. At the age of 20, Kabileño VIII has played a very important role in the offspring of the Yeguada Marín García, Yeguada Can Alzina, Alfredo Gala, Yeguada San Fernando de la Macarena, Yeguada Centurión, Yeguada Arroyomonte and currently at American breeder Rancho El Marengo.

"We are proud to communicate to customers and friends that our Kabileño VIII has been decorated as an Elite Stallion. Worldwide there are only 5 stallions with this badge and also Kabileño VIII, it is the only one in history with this award located in America. At the Rancho El Marengo, we strive every day to offer our customers the best of the PRE of the world.”

One of the riders who was able to meet and ride Kabileño VIII in the dressage arenas was Rubén Arrabe, at the time the rider at Yeguada San Fernando de la Macarena. The Spanish rider describes Kabileño VIII as:

"A very special horse for me that I was lucky enough to ride and train under the baton of my great friend Borja Carrascosa. It is a horse with a very dominant character very stallion, has a lot of strength, super hindlegs, a lot of elasticity and suspension but a complicated contact and connection. I was lucky to be able to ride and compete with him. I trained him for about two years and competed less than I would have liked."

Kabileño VIII has many sports successes, among which stand out its double national title in Functionality under the reins of Agustí Elias (Champion of Functionality SICAB 2008 and 2009 and Adult Champion of Movements SICAB 2009). The plasticity of its beauty is not the only thing that attracts attention, but also, its quality of movements. His natural gaits come from its genetic heritage.

The blood that runs through his veins is from the lineages of Yeguada Marín and Yeguada Militar. The son of Pampero VII (x Albero II) and Kabila X, is related to historical representatives of the P.R.E, such as César. Not for nothing, “Kabileño VIII” belongs to one of the most illustrious lines of Spanish functionality, that of “Albero II”, a stallion that revolutionized the breeding at the time for its wide movement and strength. Kabileño VIII revalidates and endorses the lineage of Albero II.

With a total of 78 sons/daughters, Kabileño VIII has a winning offspring. Relative to Classical Dressage we find Solano de Centurion. Under the reins of Juan Manuel Galeano, Solano de Centurión has amassed several sporting successes in the Young Horse classes. Among them, the bronze medal in the Spanish Young Horse Championship for 5-Year-Old in 2018 and one year later, the silver medal in the same contest (6-Year-Old category).

On the other hand, Jara FS, is the only mare that has proclaimed herself champion in Dressage and Morphology in SICAB.

Another mare, bred and owned by Yeguada Arroyomonte, which has stood out at the COPA ANCCE circuit is Luz FS. Recently, the bay mare won the silver medal at SICAB 2019 in the 7-Year-Old category.

As for Morphology, Mabileña DAV is one that stands out above the rest. Breed by Yeguada Domingo Arrabe Verdugo and owned by Yeguada AC ESP, for four years in a row she has remained undefeated and has been proclaimed world champion at different levels.

Other horses worth mentioning are “Truco de Centurión”: a grey stallion that was part of the P.R.E Team last summer in the World Championship for Young Dressage Horses ridden by Juan Manuel Galeano in the five-year category. “Brio de Centurión”, son of Panacea CEN who in turn is the daughter of Kabileño VIII, is the current champion of the World’s Best Young Movements (SICAB 2019)

The great essence of the continuity of the P.R.E is the outstanding labor of national and international breeders with their great work and passion for the breed. The type and lineage of Kabileño VIII are reflected in his legacy. From now on, he will continue his stud work in United States with a badge that defines him as Elite in the history of the P.R.E.

For more information about P.R.E. breeding in the U.S.A. visit www.usprea.com