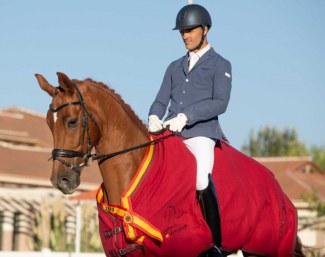 Hosted on the premises of Centro Hipico de Granada, competition was held on 26 - 29 September 2019.

This year there was more contention than usual with horses of outstanding quality that left us guessing about the outcome and added to the fun and the emotions until the end. The entry list was larger than last edition; a total of 168 combinations. The increase was due to ANCCE’s Young Horse Selection Test final for Dressage.

Furstenherz, Doñana TR, Fantastico, Hi-Rico de Sobral & Gladiador Do Lis Win 2019 Spanish Young Horse Championships. Last weekend, the premises of Centro Hipico de Granada hosted the Spanish Championship of Young Horses. The competition was held from September 26th to the 29th This time there was more contention than usual, with horses of outstanding quality that left us guessing about the outcome and added to the fun and the emotions until the end. The entry list was larger than last edition, a total of 168 combinations. The increase was due to ANCCE’s Young Horse Selection Test final for Dressage. (ANCCE = Pure Bred Spanish Horse Association)

With the largest number of entries (51), the winner was known only until the last minute. The electric atmosphere was palpable and the pushes for power were spectacular in the final.

With nothing to lose and much to gain, Luis Quilis went all the way and did not disappoint. The Valencian rider remained leader after his triumph in the first qualifier. With great prudence, the rider executed a great test. The upward and downward transitions were very clean. His 83,600 score was the one that allowed him to perservere and became the winner. Luis Quilis was proclaimed Spanish Champion in the 4-year old division with Furstenherz (by Furst Nymphenburg x Royal Blend).

Enrique Cruces with Delhi (by Don Federico out of Faconnable) was one of the riders who made one of the greatest climbs. In the first qualifier he ended sixteenth, in the final he climbed more than 14 positions taking the second-place thanks to a 80%. Following the same lines, Alejandro Sanchez del Barco, who is known to be an expert in climbing charts, surged to third place. Aboard Trapalo de Indalo (Esbelto VII out of Trapala II), the rider of Yeguada de Indalo  soared a total of sixteen positions with his 79,000; he went from top 20 to third position. Alfonso Ramírez with Lemarc de Ymas (by Vitalis out of Walencia), surprised everyone with his second position on the first qualifier. However, in the final he couldn’t repeat this placing due to a loss of balance in the trot. Alfonso Gormaz with Rock It (by Rock Amour out of Fairness), was another clear example of improvement, going from eighth to fifth place always around 78%.

Finally, after a great dance of positions, Luis Galán and Furstenherz earned the gold medal, Alfonso Ramírez became vice-champion and Alfonso Gormaz with Westphalian Rock It completed the podium.

In the 5 year old division, the youngsters had to perform three tests for the final ranking. This division was undoubtedly the most exciting. The oscillation between the first three combinations in both qualifiers made it clear that the final was the last call. The fight for top honours was not easy. Juan Manuel Acosta, Roberto Carlos Cruz, Juan Francisco Fernández, Tamar Zafra and Sergio Navarro set their pace and made it very clear that they were seeking the gold medal.

In an outstanding final, Roberto Carlos with Sansibar (by Sam Amour x  Fidermark) were excellent. The judges rewarded the quality of the horse with scores above 8.5, except for submission with a 7.9. The trot part was really worth watching: very elastic, with a lot of cadence, regularity and elegance. (84,400)

Starting as second last combination, Juan Manuel Acosta riding Doñana TR (by Danciano out of Quidana), showcased his expertise in the tests for Young horses. Scoring the highest average in the competition, the 85.800 was his golden score. Last season, Doñana TR exhibited its quality, and a year later it did it again. Normally the judges are very cautious rewarding high marks, but in the final, they rewarded Doñana TR with a 9.0 in the walk. This gait presented a very clear mechanic with good overtrack. For the fourth time in a row, the Lepe rider, who has not dropped from the top of the podium since 2016, was proclaimed Spanish Champion on Doñana TR. The Andalusian rider treasures a large number of medals. These last four years, under his golden reins, on the back of his companions Columbus TR (gold in 2016 and 2017) and Doñana TR (gold 2018 and 2019) he has been unbeatable.

Juan Francisco Muñoz is one of the riders who never misses this event. With multiple mounts in the championship, in the 5-year-old category he presented two horses, but on the Romanov's son, Over Time, this edition had the sweeter ending. While last season he became fourth, this weekend he climbed on the last step of the podium. Their progress of positions on the leaderboard in the three qualifiers was decisive: sixth, fourth and third respectively (81,000).

Summarizing the winning trio, Juan Manuel Acosta with Doñana TR are the new Champions, followed by Roberto Carlos with Sansibar and the bronze medal for Juan Francisco Muñoz with Over Time.

Juan Matute’s path to gold in this championship was very easy. He clinched the first position on the two first qualifiers and made it clear that he had no rival. On the back of Fantastico (by Furst Wilhelm out of Walneria), Juan was very regular in his scores. On Sunday, he didn’t do a golden hattrick, but the overall score made him Spanish Champion.

After processing the big disappointment of not getting selected on the P.R.E Team for Ermelo 2019, Juan Manuel Galeano and Solano de Centurión (b Kabileño VIII out of Kamoa Cen) were starstruck in these championships. Two years ago, the son of Kabileño VIII, finished ninth (4-Year-Old). Last season he won the bronze medal, and this edition surpassed the previous ones. His 77,500 (second position) in the final, combined with the other averages granted him to conquer the silver medal, making it a great end of the season.

Juan de Dios and Quarlito Von Nymphenburg (by  Quaterhall x Rotspon), the 2017 bronze medal winner in 4-year-old and silver medal winner in the 5-year-old category last year, never disappoint and always rank among the bests. His evolution is the clear example that nothing is impossible. His performances have gone from less to more. In the first qualifier he obtained ninth position, in the second he climbed five positions and in the final he placed first with 79,000. With those scores he ended with the bronze medal.

The final test of 7-year-old horses was a great battle between two titans: Juan Matute and Claudio Castilla. All the focus was on this big fight. The combat was not easy because Juan Matute fought fiercely until the end. On the back of Hi Rico de Sobral (by Oriente out of Zurita) Claudio was very consistent. On Sunday he concluded this championship by proclaiming himself Champion of Spain with a cumulative of 111,082%. Along with this gold medal, and the bronze one in 8-9 year old division, Claudio continues to give weight to his sports career. Mistakes are very expensive in the finals. Riding Galactico (by Quaterhall out of  Wareika), after a marvelous trot part, a mistake in the three tempi changes on the diagonal was the deciding factor in Juan Matute’s championship. His 74,014 (third position) in the final was not enough to beat Claudio with his 74,871. Small tenths separate Claudio (111,082%) and Juan (110,304%). Juan also returned home with two metals.

Undoubtedly, leaving aside the above-mentioned great duel, the highlight of the final was the fantastic performance of Antonio José Vázquez with Hudson M (by Cadans M out of Cilinda M). The Canarian rider sealed one of his best tests to date (second position with 74,257). Hudson M shone in his own right with an imposing trot. The rider earned the bronze medal.

Dressage becomes poetry when horse and rider dance together. The final test for the 8-9-Year-Old horses was the Freestyle. Throughout the three days of competition, the trio of winners José Antonio Garcia Mena, Sergio Martí and Claudio Castilla exchanged positions in the three qualifiers.

The first qualifier (coefficient 1) was led by Sergio Martí. The second and third were won by Claudio Castillla on Lario de Adama de Susa (by Locksley II x Rotspon). (1.5 and 2 respectively). Everything seemed favorable for Claudio, but mathematics never fail, and they were decisive for the final podium. Note that the three riders were at a very high level. The Freestyle class winner was Claudio Castilla with Lario Adama de Susa (72,858). Second place went to José Antonio Garcia Mena with the Lusitano stallion Gladiador do Lis (by Peralta Pinha out of Alteza Do Lis) 72.666%, and third, Sergio with Dilara (by Danone I out of Alandra) 72.458%.

The distribution of medals in the category of 8-9-Year-Old was as follows: Jose Antonio García Mena at the pinnacle of the podium, Sergio Martí with Dilara silver and Claudio Castilla with Lario de Adama de Susa, bronze.

Of the 67 horses that participated in the The Young Horse Selection Test Final for Dressage participating horses (sponsored by the Ministry of Agriculture and coordinated by ANCCE) 56 were Purebred Spanish Horses; of these, five earned the consideration as Excellent for Dressage. 4 years old Siete de Susaeta, owned by Yeguada Susaeta and ridden by Guillermo Garcia Ayala, earned the maximum category, with the highest average in this final: 76.700%, together with Trapalo de Indalo from Yeguada Indalo (76.500%) and Inspirado BIO III, owned by Yeguada Bionest (75.600%). In the category for 5-year-olds, this same category was earned by two PREs: Velero W from Yeguada Curro Gil, bred by Jose Werner Lopez, and ridden by Francisco Gil Ortiz, and an average of 75.600% and Educado de JJ, owned by Yeguada Varsil and bred by Juan Jose Montes Sanchez (75.400%).