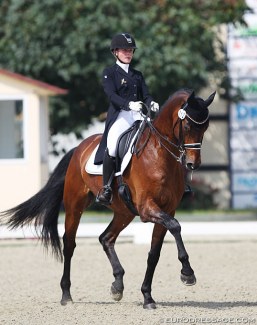 The 2020 European Youth Championships in Budapest, Hungary, kick off next week with the Children and Junior Riders' Championships. Spain had selected two teams for Budapest, but its federation advised their riders made a U-turn at the Hungarian border, which ended the dream of competing at this year's Europeans.

The Spanish Children and Junior team riders traveled in caravan to Pilisjaszfalu, Hungary on Thursday 6 August 2020. However, their trucks were stopped at the border between Austria and Hungary. A turbulent and emotional day followed, which ended with three Spanish individuals continuing the journey to compete in Budapest.

Spain from Green to Yellow

That day Hungary had changed the risk classification for Spain, governing restrictions on arrivals of Hungarian and foreign nationals based on rates of novel coronavirus infections, from green to yellow.

Arrivals from countries with low rates of coronavirus infections, color-coded "green", can enter Hungary without restriction.

Non-Hungarians arriving from yellow and red countries must go into a 14-day quarantine unless they can produce two certified negative coronavirus tests from the previous five days, conducted at an interval of at least two days, upon arrival. The quarantine may also be lifted after arrival following a single negative COVID-19 test in the case of visits to yellow countries and two negative COVID-19 tests in the case of red countries.

On Thursday morning, the Spanish caravan was stopped at the border and a lot of confusion arose. After communication with the Spanish Equestrian Federation (RFHE), the president of the RFHE sent a message at 10h45 with the express order not to continue with the journey and to cancel all activities related to it (hotels, flights, etc.)

The trucks made a U-turn and drove back to Spain.

The Spanish federation was advised to cancel the athletes' journey by the Spanish Embassy in Hungary. This also led to them cancelling the flights of the Spanish team trainer and team vet.

However, three hours later, while the caravan was in Italy, the RFHE received message from the Hungarian government and they passed on the message to the Spanish delegation on the road, at 13h15.

A document from the Hungarian Government was provided and the decree grants sport athletes and their companions a special permit to enter the country without the need to do a PCR corona test, nor the two-week quarantine.

The decree is signed by Dr. Tünde Szabó, Secretary of State for Sport of the Hungarian Government. It states:

For the Spanish riders the day was one of great emotional and practical turmoil with feelings of disappointment and helplessness prevailing.

Between the morning and 16h00 in the afternoon, the young children saw their dreams of competing at the European Championships dashed, but then flair up again after seeing the decree.

Spanish team riders Javier Guillén, Lourdes Aulet, Jose Ramón Escobedo Medina, Claudia Lledó and Alfonso Ruiz all shared one big truck to ship their horses. They decided not to turn around once more.

Spain will now be represented by just three riders in Budapest. Children rider Arianna Abad Feliú and junior Carla Ugena made another 180 ° and drove back to Hungary, but at their own risk without coverage from the RFHE.  German based junior Lilly Martínez is already in Budapest.

Compete at Your Own Risk

At the end of the day, the Spanish federation issued a statement, explaining the turbulent situation of the day.

"The RFHE, in addition to the continuous contact it maintained from the beginning of the planning of the trip to the Championships with the Spanish Embassy in Hungary and the Superior Sports Council, has shared all this information with those selected, offering them the possibility of either not attending the event, or doing so under the new conditions set by the organization."

Despite turbulent times due to the corona pandemic, the 2020 European Youth Championships saw only two countries (Norway and Sweden) bar its riders from competing in Budapest. Great Britain did not want to make funds available for the trip and has allowed individual riders to go self-funded.  Russia does not allow its citizens to cross the border for non-essential trips and under age athletes competing at Championships fall into this category. It has offered its riders to go to Budapest at their own risk.

The Master list for the 2020 European Young Riders and Under 25 Championships on 17 - 21 August 2020 shows exactly the same amount  of 57 young riders competing in Budapest as in 2019 in San Giovanni. For the 2020 edition there are 30 Under 25 riders nominated to compete, while in 2019 there were 33 competing, a marginal difference.