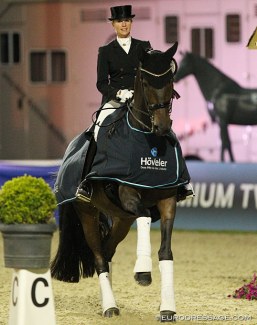 The 2020 CDI Hagen at Hof Kasselmann was the first CDI post corona where the real big names gathered for a first power meet in an atypical show year in which there are no competition highlights for the senior Grand Prix riders with the World Cup Finals and Olympic Games cancelled.

The team at Hof Kasselmann is always able to draw out the elite stars and for its Grand Prix with a head count of 27. Also the line-up of judges was glitzy with 5* star judges Hans-Christin Matthiesen, Ulrike Nivelle, Evi Eisenhardt and Christof Umbach there, joined by 4* judge Marietta Almasy. Unfortunately the judging of this Grand Prix class raised eye brows as massive points were given to top riders for tests riddled with mistakes and not showing the polish and fine-tuning normally seen by these pairs.

In this 2020 corona year, in which a lack of show routine is inevitable and training for absolute peak condition unnecessary, this is totally understandable and acceptable. However, the judging should have been accordingly and it wasn't ! Far from it. Big names were there, so big scores were giving, no matter what was shown in the ring. Often we stood there wondering if the judges would benefit from some extra tutoring on the FEI Judges Handbook. There were combinations showing zero lengthening of frame and stride, neither in walk, nor trot, nor canter; still they were given 7s and more. There were piaffes with horses falling on the forehand scoring 8 or more because the rhythm was regular; tempi changes with several broken ones still scoring 5 or more. And then we don't even mention submission and contact with either horses squeezed tight in the frame (making the self carriage of the horse questionable), or in a fake light connection, not truly accepting the bit.

It was all a bit mind blowing, to be honest, but if you think "Hakuna Matata" and realize that these shows count for very little, accept maybe world ranking points, then let's hope the ante is upped in 2021. Achieving championship level form shouldn't be a goal this year for riders. Yet a little less perfection does not diminish the joy of watching fabulous dressage horses compete, also in Hagen. It was a wonderful class to follow, for sure.

With a sunset afterglow in the skyline in the distance Jessica von Bredow-Werndl and Beatrice Burchler-Keller's 13-year old Trakehner mare Dalera (by Easy Game x Handryk) topped the board, earning a generous 79.370% and unanimous victory under floodlight. The prize giving ceremony for her win took place well past bed time, at 23.30h in the dark.

Von Bredow and Dalera are always a pleasing pair to watch: elegant and graceful. The trot extensions were nice although they did not have the biggest ground cover. The right half pass was more elastic than the left one. The passage was lightfooted and the first piaffe nicely on the spot; but Dalera could have a straighter front leg and more balance. The extended walk was good, the collected became slow and lateral (score between 5 - 7.5). The second piaffe was the best one. The two tempi's were straight but there was a lot of tail swooshing, there was a mistake in the ones (4 - 6.5). The extended canter was well ridden, but the flying change at the end were not so polished (8). Also in the zig zag it didn't all go as smooth and balanced as normally with one failed change (5 - 6.5). The final centerline was well ridden with the mare keeping an expressive rhythm in the piaffe and passage.

Hof Kasselmann's in-house rider Frederic Wandres finished second aboard his boss's 13-year old Hanoverian gelding Duke of Britain (by Dimaggio x Rubinstein). The pair did not have such a long break from competition, having started at the CDI-W Gothenburg in February, and they seamlessly picked up show shape in July.

Wandres rides his chestnut gelding with a lot of energy, especially in the half passes. At times it looked a bit rushed. In the first piaffe he back stepped a bit with the right hind, but the passage had much ground cover. The second piaffe-passage was very expressive although the left hind pushed a bit less. Duke of Britain executed lovely one tempi changes, in the two's the changes to the right were a bit shorter. The final passage on the centerline was forward, but the piaffe at X became wide behind. They scored 75.848% to place second.

Patrik Kittel saddled his number one Grand Prix horse, the 12-year old Swiss warmblood mare Well Done de la Roche CMF (by Furstentraum x Walt Disney). The bay mare is a very lightfooted mover with a very feminine and elegant expression. The collected gaits come more easily to her, while in the lengthenings she stays too fixed in her frame and does not lengthen her stride, instead becomes quicker. The judges score her trot extensions between 6 - 7 though. The trot half passes are very graceful. In passage there is much airtime but in piaffe she becomes tense and mechanical. Also the collected walk is lateral (score 5 - 7). The extended canter was good, yet the flying change was early on the marker. The zig zag was neatly ridden and the one tempi changes were nice. The pirouettes were small with the right one being the best one. They scored 75.848%, an identical mark to Frederic Wandres, but they ranked third.

Sönke Rothenberger kept his number one, Cosmo, at home and brought his 12-year old DSP bred Santiano R (by San Amour x Lord Sinclair) to Hagen. The first two extended trots were ridden too conservatively and no overstep was achieved (6.5 - 7). The third extension was the best one. In the first piaffe, Santiano struggled a bit to settle into the rhythm, in the second there should have been more suspension. The passage can be very expressive, but was not always regular. The zig zag was well ridden and the one tempi changes were very straight. The pirouettes were also small. The piaffe at X was the best one, although the right hind swings out from under the body. The judges were a bit in a pickle over Rothenberger's ride and scored it between 71.957% and 77.609% !! This averaged to 74.783% and a fourth place.

Swedish Antonia Ramel and her 14-year old Dutch warmblood gelding Brother de Jeu (by Voice x Jazz) made their first start in seven months and the break from competition seemed to have done the dark bay good. The horse looked more muscled and had gained a bit of weight, which suited him. As last rider to go on the day (past 23h00 o' clock) it required an extra effort from the judges and audience to sit on the edge of their seat and pay full attention to the ride in the semi dark. Ramel had her horse well on the aids and produced very consistent work, both in trot and canter. The piaffe was nicely on the spot and rhythmical and the passage regular. The tempi changes and pirouettes were secure. Overall the bridle contact could be a bit lighter, with less curb. The judges were also split over this test, with 71.087% as low score and 77.609% as high score. They finished fifth with 74.522%.

The 2020 CDI Hagen Grand Prix featured several interesting and talented horses, but the total fine tuning between rider and horse were not there yet.

Benjamin Werndl brought his rising star, Flora Keller's 11-year old Oldenburg gelding Famoso OLD (by Farewell III x Welt Hit II). The dark bay is a little pocket rocket and the pair started well with lovely passage work. The piaffe has all the ingredients to be truly great if the horse would lift himself more in the withers instead of lean on the forehand. Unfortunately in the canter work it went all awry and Famoso did not want to do the flying changes. There were mistakes in the two's, the change after the extended canter, in the zig zag. Nonetheless the pair still finished on a surprising 74.326% and 6th place. Famoso seems to need more time to grow and develop.

Finnish Henri Ruoste brought his new star out, Jochen Arl's 10-year old Belgian warmblood Kontestro DB (by Contendro x Cassini II). The bay, show jumping bred already showed that he easily masters the Grand Prix movements at the CDI Le Mans in February and reconfirmed his talent in Hagen. The gelding is a very expressive, powerful mover with lovely half passes and trot extensions. The passage is off the ground and strong, but needs to be more regular. The piaffe was on the spot but quite tense. Kontestro had enough overtrack in the extended walk, but in the collected became prancy in front. Ruoste cleverly steered the green Grand Prix horse through the canter tour, keeping him on a short rein and tight in the neck.  Kontestro executed all the canter movements despite tension building up. The super straight one tempi changes were a highlight! The pair scored 74.065% to finish 7th. There is certainly more in the tank.

Ruoste's wife, Senta Kirchhoff, landed 8th place aboard her 2019 Louisdor Cup winner L'Arbuste (by Skovens Rafael x Zardin Firfod). The 10-year old Oldenburg gelding has made its international debut in the classic Grand Prix in Hagen and were the first pair to compete in the class. The refined gelding is a modern and sporty horse with a floaty passage. In the piaffe the horse stays straight in the hind legs and does not yet take the weight and sit. Kirchhoff rode her horse very carefully through the movements. They scored 72.826%, but the judges were divided and had her between 70.978% and 75.761%.

After selling Suppenkasper for several million to the U.S.A., Helen Langehanenberg is now working on bringing on the next generation to Grand Prix level, as her top horse Damsey is 17 and nearing the end of his career in one or two years. Langehanenberg has Hollywood and Annabelle as her rising Grand Prix stars and she brought the latter to Hagen.

Owned by Gunther Fielmann, the 12-year old Holsteiner mare Annabelle (by Conteur x Linaro) paints a very pretty picture but is more of a leg mover, being "up" in the frame instead "forward" over the topline; especially in trot. The passage was graceful, a tiny bit uneven, but the transitions in and out of piaffe were very smooth. The piaffe has a lot of lift in the legs, but could be carried more from behind. There was no overstep in the extended walk and the transition from collected walk to passage was too early as the mare anticipated it. The second piaffe was nicely on the spot. The tempi changes were tense and lacked ground cover and the left pirouette was a small circle. The final centerline was lovely though, even though the horse got slightly crooked to the left. They scored 72.761% for 9th place.