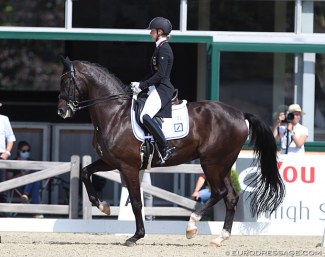 The German equestrian federation and its team trainer Sebastian Heinze have picked the Under 25 riders that will represent Germany at the 2020 European Youth Championships in Budapest on 19 - 22 August 2020.

As team selections were quite different this year due to Corona, the Under 25 team was picked based on two competitions: the first leg of the Piaff Forderpreis in Kronberg and the CDI Hagen at Hof Kasselmann on 17 - 19 July 2020.

Kick off in Kronberg

Not all German Under 25 riders were in the running for team consideration, a fixed group was picked beforehand and they had to battle it out.

A group of 19 riders were chosen to ride at the first team trial in Kronberg. This event was originally scheduled to take place in Warendorf but because of a new corona outbreak in the area (coming from the Tonnies mass meat production company), Warendorf was closed for the week.

In Kronberg, Ann Kathrin Lindner, Hannah Erbe, Jil-Marielle Becks and Raphael Netz rode themselves into the top four and were holding the strongest cards going to Hagen.

The second team trial was a more serious competition set at international show in front of a panel of three judges, the Polish Malgorzata Pawlowska, French Raphael Saleh and German Knut Danzberg.

The top four from Kronberg was not overtaken in Hagen and underlined their unmistaken candidacy for the team.

The Heilbronn based Ann-Kathrin Lindner and her 11-year old Wurttemberger bred FBW Sunfire (by San Amour x Freudenfeuer) won the Intermediaire II with 74.265% and the Short Grand Prix with 75.538%. In the Inter II the black gelding showed a very beautiful in the piaffe but could sit even more behind. The extended walk lacked some ground cover, but the uphill one tempi changes were a highlight. In the pirouette right he got a bit stuck in the rhythm. Overall Lindner and Sunfire were the most solid and harmonious pair in an international field of fourteen, with the lightness and steadiness in the contact standing out, although it would be nice to see the horse a bit more on, or even slightly in front of the vertical.

After winning the 2015 European Junior Championship and 2017 European Young Rider Champion, Hannah Erbe is now going for it in the Under 25 division. A knee injury and operations kept Erbe out of the saddle but her13-year old Rhinelander Carlos (by Carabas x Weltmeyer) stayed in shape by her sister as well as new coach Stefanie Wolf. In Hagen, the pair stood out with very elegant and lightfooted passage, even though Carlos is a big muscled horse. The piaffes were small though, with no real sit and in the extended walk the overtrack was limited, but the canter work looked very secure although the impulsion somethings wavered a bit. Erbe and Carlos twice finished second with 72.108% and 73.615%.

Jil-Marielle Becks and her 13-year old home bred Westfalian mare Damon's Delorange (by Damon Hill x Rubin Royal) twice finished third. The liver chestnut mare has gained muscle and strength but the bridle contact is not ideal. She creeps behind the vertical and was too light throughout the Inter II, even flashing her tongue some moments. Nevertheless, the passage is incredibly off the ground and graceful with much airtime, but it was not always regular. In the piaffe she leans too much on the forehand. Her rhythm was better when the piaffe was executed on the track and the potential for a great piaffe is there if she carries herself from behind. The one tempi changes were delightful as well as the extended canter. She earned 71.912% for the Inter 2 and 72.410% in the short Grand Prix.

Raphael Netz makes the most out of the Werndl family's 12-year old Hanoverian gelding Lacoste (by Locksley II x Wolkenstein II). The friendly chestnut is presented in a sympathetic way and the horse shows good willingness to work, even though he is always croup high in the piaffe and passage. The pirouettes were small and there could have been more fluent striding, but overall Netz produced good rides. He scored 70.637% in the Inter II for fourth place and 71.615% in the Short Grand Prix to place fifth

The German Under 25 Team

For team trainer Sebastian Heinze the decision must not have been that difficult. He re-selected three riders from the 2019 European Under 25 Championship test (Lindner, Becks, Netz) and picked Hannah Erbe as the new comer (who replaced Bianca Nowag who is out of the U25 division).

The first reserve is Alexa Westendarp on Hof Kasselmann's Hicksteadt (by Hudson x Walt Disney) and the second reserve is Evelyn Eger on Hof Kasselmann's Whitley (by Don Schufro x Lauries Crusador xx). Both horses are familiar faces to the international Grand Prix ring. In 2014 Hicksteadt competed on the Spanish team at the World Equestrian Games under Borja Carrascosa, and Whitney was trained to Grand Prix level by Danish Olympian Nathalie zu Sayn-Wittgenstein.

"You can see from the scores that the girls and one guy showed good sport here in Hagen," said Heinze. "It's a lot of fun to work with these riders and to go to the European Championships. I'm particularly happy about the good development of Carlos, who now brings more security to the arena. Also Sunfire developed well over the year. Damon's Delorange is showing a different quality in piaffe and also Raphael is secure on his Lacoste. As a rider he does a truly good job. I'm very optimistic for the Europeans."

Germany will defend its team gold medal in Budapest, although the individual gold was won last year by Dutch Jeanine Nieuwenhuis.

"How the other nations are doing, we'll find out in Budapest because so few international shows took place until now. It will be exciting," Heinze continued.