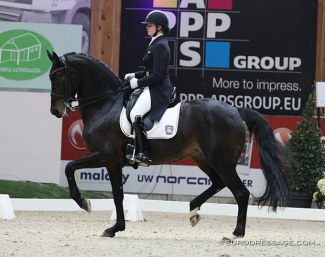 As one of the last federations to decide on their selection criteria for the 2020 European Youth Championships, the German Equestrian Federation has finally published their system for picking teams for Budapest.

The 2020 European Youth Championships have been consolidated for all divisions and will take place at Stable Unikornis near Budapest, Hungary, on 9 - 30 August 2020.

In corona times in Germany big discrepancies took place between the north and the south, with the northern based riders able to travel to the DOKR headquarters in Warendorf for continued squad trainings, while the southern based riders were in lockdown. Also competitions restarted already at the end of May/beginning of June in the north, which was not the case in the south.

The German FN has finally decided on a selection process for the European Youth Championships.

Children, Pony, JR, YR Based on Selection Weekend in Warendorf

The selection for the Children, Ponies, Junior and Young Riders will be held at the DOKR centre in Warendorf on 17 - 19 July 2020, and NOT at the CDI-PJYR Hagen as it was expected. Traditionally the CDI Hagen Future Champions used to be the final qualification CDI for German team riders in the past.

The basis for selection are the training seminars, which are being held in Warendorf at this moment, as well as the CDI Mariakalnok which takes place 25 - 28 June 2020.

Interesting to note is that three riders have been submitted to the Piaff Forderpreis / Under 25 group although without having ridden the mandatory selection trial in Warendorf in February pre-corona.

The three additions are Sophie Reef (Charming Lady), Hannah Erbe (Carlos) and the 20-year old Semmieke Rothenberger (Dissertation), who is in her last year as a young rider but who has declared in 2020 as an Under 25 rider.

Team trainers Monica Theodorescu and Sebastian Heinze approved their entry to the Piaff Forderpreis group, but this has led to frustration and complaints of favouritism from other Under 25 riders, who prepared and were ready to ride the important selection trial in Warendorf in February, or from those who did not make it to the Piaff Selection trial due to various reasons and did not get a second chance, even though they are now ready for Under 25 competition.

"There were a few U25 riders who were not able to take part in the selection in February because of sickness  or other reasons," Monica Theodorescu told Eurodressage. "As the possibility to start in competition was very limited due to the corona situation, the German Dressage Comitee decided to invite a couple of riders, who were not able to come in February, to ride the test with Sebastian and myself."