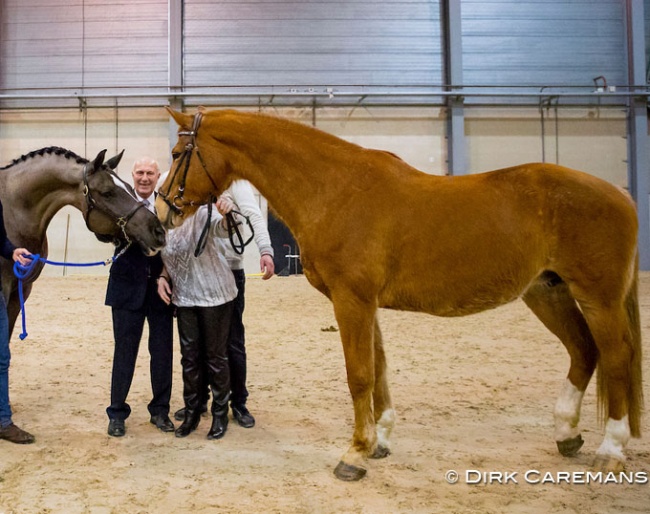 Maifleur, the dam to double Olympic champion Valegro, has passed away. The mare was 26 years old and owned by Joop and Maartje Hanse.

Maifleur was a 1994 born KWPN mare by Gershwin (by Voltaire x Nimmerdor) out of Weidyfleur (by Heidelberg x Frappant).

The couple Joop (82) and Maartje (73) Hanse own a farm with a mini camping in Haamstede, The Netherlands, in the province of Sealand. They have been breeding horses since 1978. Their first mare was an imported Polish mare named Manjo and their second was Pfleur (by Frappant), who produced keur mare Weidyfleur in 1980 and she produced Maifleur in 1994.

Maifleur was champion of the Breed Show in Sealand as a yearling. In 1997 she did the mare performance test and scored 76 points as the best in a group of 25 mares. She was proclaimed "keur" mare and became the champion mare of the Breed Show in Vrouwenpolder in 1997. She competed at the KWPN Mare Championship that year.

"Maifleur has jumper blood and we chose Ferro blood for her. At Van Olst there was the KWPN stallion Negro. We had already bred with many stallions at Van Olst and for us the choice was logical," said Hanse in a KWPN interview. The result was Valegro.

Maifleur produced six foals in her life, the first one, Soleil-Fleur, was born in 1999 and by Kennedy. In 2002 Valegro (by Negro) followed and his full sister Weidyfleur II (by Negro) in 2003. In 2005 she produced a filly named Aimfleur (by Lupicor) and then there was an almost 10 year break from breeding. In 2014 a filly by Negro was born, named Jalegrofleur, in 2016 the colt Lelegro (by Negro) followed.

Maifleur was fit throughout her life. At age 25 she still went hacking regularly with Joop and only recently her health started to decline.

Maifleur last appeared in public at the 2017 KWPN Stallion Licensing in 's Hertogenbosch, where a special tribute and retirement ceremony was held for Valegro.