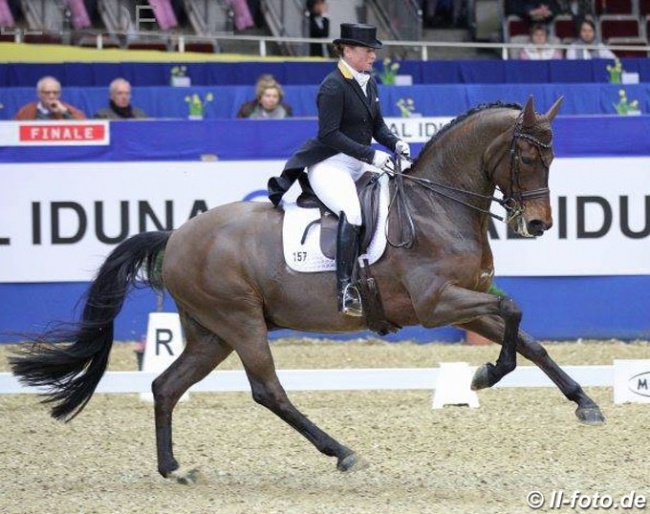 Isabell Werth made a clean sweep at the 2019 CDI Dortmund in Germany on 8 - 10 March 2019. Bringing good-old Don Johnson as well as her fourth Grand Prix horse in the bar, Emilio, to the Westfalenhalle in Dortmund, Werth won all three big tour classes.

Emilio, whose last international outing was at the CDI Geneva at the beginning of December 2018, claimed the victory in the Grand Prix Special with 79.128%. They left Jessica von Bredow-Werndl on her 15-year old KWPN mare Zaire E (by Son de Niro x Jazz) far behind them as they placed second with 75.489%.

In the Kur to Music, Don Johnson rocked the house and took the trophy with a winning score of 81.595%. Ingrid Klimke and the 11-year old Hanoverian stallion Franziskus (by Fidertanz x Alabaster) were second with 76.840%.

"I thought it was good for Emilio to do one more show before he goes to 's Hertogenbosch," Werth told Dressursport Deutschland about her Dortmund weekend. "And I'm very happy I did this," she said as Emilio was switched on in the Grand Prix and didn't stand still. "I couldn't care if I would cash in a 3 for that. For me it was important to make him feel at ease."

Werndl was pleased with Zaire's performance. "Those who know Zaire, know that she's a nervous horse, looks at everything and can wind herself up," Werndl explained. "So that is why I am pleased that I was able to ride her more today (in the Special). She has matured."