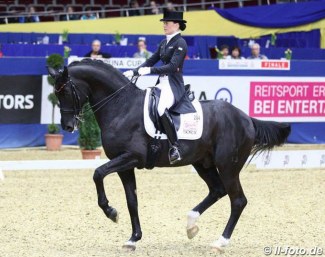 Kristina Bröring-Sprehe and Desperados FRH, Germany's strongest dressage pair between 2014 and 2015, has made her long awaited come back to the show ring after a 16-month break from competition due to an injury. Sprehe presented an energetic and willing stallion, but they were slightly ring-rusty. For the judges no water had gone under the bridle and they picked up the identical score cards from two years ago.

Desperados' last show was the 2016 CDI-W Stuttgart in November 2016 where he scored 79.140% in the Grand Prix. In 2017 the black De Niro x Wolkenstein II stayed home, recovering from injury and in February 2017 he made his first public appearance again at the Gestut Sprehe stallion show. Dortmund is Kristina's lucky show: in 2012 she made her big international break through there, beating Laura Bechtolsheimer on Mistral. She went on to win the CDI Dortmund no less than four times: in 2012, 2013, 2015 and 2016.

Her 2018 CDI Dortmund Grand Prix ride was certainly promising for elite level. They began their test with an active extended trot, in which the horse got wide behind. The half passes were not the purest in rhythm behind, but great in ground cover. The first passage was very uneven behind with the right hind trailing. The first piaffe had much elevation but was crooked to the left in the hindquarters. Nevertheless, Desperados showed good energy and eagerness to do the job. In the extended walk there was good overtrack, but the nose could have stretched a bit more forward despite the given rein. There was a double beat in the transition walk - passage, the second piaffe was very nice and on the spot. In the canter work there was a counting error in the zig zag, the two tempi's were good but could have been straighter in the body. The extended canter was lovely, the ones correct. The pirouettes are still a highlight, in which the horse really takes the weight on the hindquarters. The horses anticipated the piaffe at X and stalled early, the piaffe itself was very nice, but then the passage towards G became uneven again. The test had plenty of highlights but it did not yet show the fine tuning and ultimate elegance for which Sprehe and Desperados are known. However, the road is open for WEG team selection.

The judges panel in Dortmund, consisting of Isobel Wessels (GBR), Hans Christian Matthiesen (DEN), Christoph Hess (GER), Yuri Romanov (RUS), and Evi Eisenhardt (GER), saw no difference with previous years and rewarded the come back ride with a whopping 79.739%, an early Christmas present. German judge Evi Eisenhardt was more on point with her 77.500%, British judge Isobel Wessels gave the high score and rewarded the ride with 81.739%.

Russian Inessa Merkulova and her mega talented 14-year old Russian Trakehner Mister X (by Egeus) are a pair of highs and lows. Mister X is without a doubt one of the most talented Grand Prix horses in the world, but you never know what test to expect depending how on form the rider is. Merkulova can show incredible things on this horse. A piaffe that is a straight 10; also today in Dortmund. A passage that comes close to perfection and brilliant pirouettes, but it's the contact with the bridle that makes you gasp for air. Unfortunately the rider relies on the reins and a hold on the mouth to keep her balance in the saddle. Show after show one hopes for more independence of the seat and self carriage of the horse. The day they accomplish that, we're talking 80% marks.

Today was a good day. The desired light contact was still a far cry with the long reins and high hands, but Merkulova was focused and did not destabilize her horse too much. The piaffe was breath taking, the rein back well done. The passage was rhythmical and energetic, but sometimes a bit twitchy. Mister X showed good relaxation and overstep in the extended walk, the zig zag was solid. The tempi changes have plenty of uphill tendency and ground cover but the two's were not straight. The pirouettes were small, but the right one was counter bent.

Fabienne Lutkemeier and the 11-year old German Sport Horse gelding Fabregaz (by Florestano x Ragazzo) landed third place with 72.130%. The tall dark bay gelding had a small hiccup at the onset of the first piaffe and there were some rhythm and impulsion issues in the second one, but the passage floated nicely. There was limited stride length in the extended walk and the collected walk was very short, but in canter Fabregaz can really score. He showed beautiful, uphill tempi changes, lovely pirouettes with the left one being the best one, and good balance in the zig zag. They finished with a nice final centerline.

Hubertus Schmidt and Imperio were the Rio Olympic team reserves but since 2016 the 15-year old Trakehner stallion has not been able to peak. In Dortmund the bay showed good trot extensions, but in the half passes the hindquarters needed to track up more. There was nice rhythm and relaxation in the extended walk, although Imperio did not achieve the greatest overtrack. He ran out of steam in the second piaffe, and overall the passage could have more push and energy. The extended canter was very nice, but the one tempi changes were a bit tense. The pirouettes were good. They got 72.043% for fourth place.

Dante Weltino: Not His Day

Therese Nilshagen and the 11-year old Oldenburg stallion Dante Weltino (by Danone I x Welt Hit II) were expected to be Kristina Sprehe and Desperados' biggest rivals in Dortmund after their gigantic success at the 2017 European Championships in Gothenburg. They last competed in Stockholm in December 2017 where they posted 77.980% in the Grand Prix. In Dortmund, however, they lacked the fine-tuning for top notes.

Dante Weltino showed beautiful trot half passes, but in the extended trot he was not covering enough ground despite his shoulder freedom and scope in front. Overall the stallion was not enough in front of the aids and though their light contact is very much appreciated and generates a wonderful, pleasant silhouette, the horse did not stretch into the contact today and was not seeking the bit. This resulted in piaffes with backward tendency.  The extended walk had two hooves overtrack but there was not much of a V-moment in the rhythm. In the two tempi changes the stallion swung a bit with the hindquarters, and in the zig zag the hindquarters led. The one tempi changes were clean, but needed to be a bit more forward and uphill. The pirouettes were tiny. There was a mistake in the rhythm in the third trot extension. The best pi-pa was on the final line, but in the final stretch of passage the horse stalled and halted well before the marker.

Germany Safe for Gold in Tryon?

This early in the 2018 show season it is incredibly exciting to see what kind of horse power Germany keeps bringing to the fore. Isabell Werth, who is not in Dortmund because she has the flu, has two horses scoring 80%, Weihegold and Emilio.

Dorothee Schneider made her come back on Showtime after injury in Munich in November 2017  and scored 79.280%. The pair has not been out since. Her second team horse Sammy Davis Jr got 76.739% in Neumunster last month and 78.120% in Salzburg three months earlier.

Helen Langehanenberg and Damsey scored 78.044% in Neumunster right before the rider went on a baby break.

Sönke Rothenberger and Cosmo are still missing in action. They have not competed since the 2017 European Championships in Gothenburg.  Rothenberger traditionally skips the winter indoor circuit and prefers to get warmed up at the Spanish shows in March, but not this year. His first start of the season is anticipated in Hagen at the end of April.