Kasprzak Shows the Way in Nations Cup at 2017 CDIO Uggerhalne 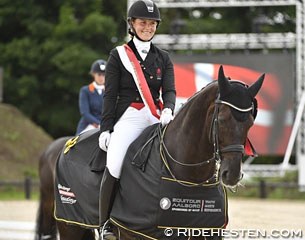 Danish Olympian Anna Kasprzak has shown her team mates the way in the first part of the FEI Nations Cup competition held at the 2017 CDIO Uggerhalnde in Denmark on Sunday 4 June 2017. Only four nations are entered to compete in the third Nations' Cup leg of the 2017 show season at Uggerhalne and the home team is now in the lead after the Grand Prix.

Anna Kasprzak and her 18-year old Finnish warmblood Donnperignon (by Donnerhall x Mozart) scored 74.720 for the victory. All five members of the panel of judges, which included Matthiesen (DEN), Riexinger (GER), Asmyr (NOR), Ebert (GER) and Colliander (FIN), ranked the pair first.

Danish Agnete Kirk Thinggaard, who had hoped to qualify her new purchase Atterupgaards Orthilia for the 2017 European Championships, will have to rely on her experienced equine partner Jojo AZ (by Ginus x Justboy) for the 2017 season as Orthilia injured herself. Agnete and her 2016 Olympic ride Jojo AZ again proved their worth in their first show together since November and placed second with 72.660%.

The third Dane on the team for Uggerhalne, Daniel Bachmann Andersen, placed third in the Grand Prix. Aboard Blue Hors stud's Dutch warmblood stallion Zack (by Rousseau x Jazz), he scored 72.060% and edged Finnish Henri Ruoste on Jochen Arl's 10-year old Holsteiner gelding Dixiland (by Dolany x Loutano) who posted 71.460% on the board. 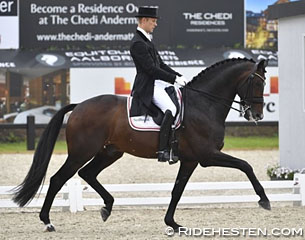 The Danish team is currently in the lead with 219.440 points, followed by Finland with 206.260 points, The Netherlands 205.320 points and the U.S.A. with 204.140 points. Two per team will ride the Grand Prix Special or the Grand Prix Kur tomorrow Monday 5 June 2017 after which the winner of the Nations' Cup leg will be known.