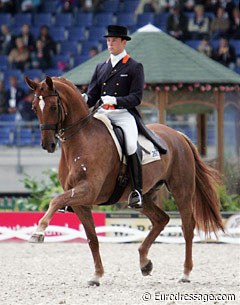 The 21-year old Hexagons Ollright has passed away at his home in Great Britain on Monday morning 22 May 2017. The Dutch warmblood gelding was 21 years old and suffering from old age.

"Olly had severe arthritis. Although he was eating and looked well, he was having trouble getting up and down. He suddenly got very bad in the last few days and despite veterinary help he wad getting worse," Dane Rawlins told Eurodressage. Ollright spent his last years in Hickstead, Great Britain as a schoolmaster for Lady Harris.

"We, along with the vet and Lady Harris, felt that it was kind to put him to sleep before he could not get up any more. Everyone here is very sad as he was a great friend with a wonderful history and place in our sport, particularly for the Dutch Team under the super training and riding of Laurens van Lieren. Olly was a real Star!"

Bred by Leunis van Lieren, Ollright was by Rubiquil out of Jamaica (by El Corona).

The horse made its international show debut as a 6-year old at the 2002 World Young Horse Championships in Verden. Under Nicolette van Leeuwen (then Van Lierop) he finished 24th and 11th in the first two qualification rounds but did not make it to the finals. That same year Laurens van Lieren competed Ollright as a 6-year old (!) in the small tour classes at the 2002 CDIO Aachen.

In 2005 Wim Zegwaard had secured a 50% ownership in the horse which enabled Laurens to keep the ride on the tall and long chestnut gelding. The pair also competed at the 2006 and 2008 World Cup Finals. At a national level they won bronze at the 2005 Dutch Championships. 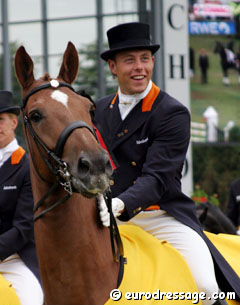 In 2010 Ollright sold as a schoolmaster to Lady Pauline Harris in the U.K., who trains with Dane Rawlins. Dane tried showing Ollright himself at the 2011 CDI Saumur but got eliminated in the Grand Prix. The horse no longer competed internationally since then but with Lady Harris he was show at national level in the U.K. up to Grand Prix.

"Lady Harris rode him as a schoolmaster in many competitions including a couple of Grand Prix classes. He was very cheerful and cheeky right until the end," Dane explained.

Laurens van Lieren was saddened to hear about the passing of his career-making horse: "Sometimes words are not enough. One of my dearest friends passed away this morning," Laurens van Lieren said about the passing of Ollright. "He has been a very loyal friend for many years, he has taken me to places around the world. Places I would not have seen without him, not to mention the lessons and beautiful experiences I would have missed out on. Thank you Ollie, you were one of a kind! I will always remember your spirit, your power and energy! You'll be in my heart forever."