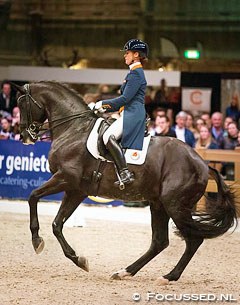 The VHO Trophy is more a display show than a true competition and is a moment for KWPN stallion owners to showcase their breedings sires in a kur to music presentation in front of the sell out crowd at the licensing. Judges Mariette Sanders-van Gansewinkel and Sandy Phillips assessed the colts and ranked the six participants.

Kirsten Beckers and Westpoint (by Jazz x Michelangelo) claimed highest honour with their 73.44% score for their Grand Prix kur ride. Westpoint is a former World Young Horse Champion who sold to Broere stud right after he obtained that young horse title in Verden under Emmelie Scholtens. Beckers continued the training of the black stallion. The now 13-year old  made his international Grand Prix debut at the CDI Arnheim in June 2014.

The other five VHO contestants all showed at small tour level. Patrick van der Meer and the chestnut Chagall (by Jazz x De Niro) were the runners-up with 72.31%, followed by Emmelie Scholtens on the chestnut Dorado (by Krack C x Rousseau) with 71.13%.

Tommie Visser and Bojengel (by Uptown x Gribaldi) followed with 69.75%, Ingrid Gerritsen and Valdez (by Houston x Jazz) earned 67.19% and Madeleine Witte closed the ranks on the popular breeding stallion Charmeur (by Florencio x Jazz) with 66.00%.