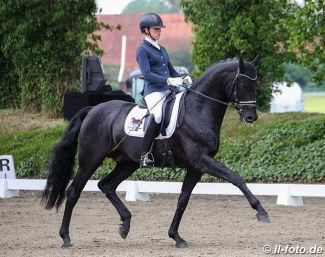 The Oldenburg licensed breeding stallion Zonik One has been sold to German dressage rider Katja Willers.

Zonik One is a 2013 born stallion by Zonik out of Remember (by Depardieu x Le Matin x Classiker). He is bred by American Ann Kitchel in Germany.

Owned by Paul Schockemöhle in partnership with Wilhelm Holkenbrink, the black was first licensed at the 2015 Mecklenburg Stallion Licensing in Redefin and later on, at the 2015 Westfalian Late Licensing and in 2018 for the Hanoverian society.

The sport career of the stallion was under the care of co-owner Holkenbrink who allocated the ride on Zonik One to Johanna Klippert. She made her show debut in 2016 and competed him through 2019. Their last show was at M-level at a local event in Coesfeld.

The owners decided to sell Zonik One and relocated him to Mühlen, where he sold to the German professional Katja Willers.