Bernard Maurel: "The Evolution of Our Sport and Its Philosophy" 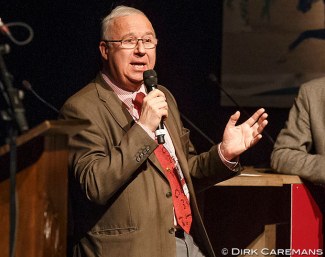 Guest columnist of the week is French 5* dressage judge Bernard Maurel. He responds to the mail chain that has been created by the opinion piece "Question about the Changing Ideals of Dressage Through the Years", which was followed up with a reply article, "What will Equitation of Tomorrow Look Like with the Guardians Looking Away?"

The Evolution of Our Sport and Its Philosophy

During this difficult period with many countries impacted by the Covid-19 and no more competitions, we have time to think about the future of our life … and of our favourite sport, dressage.

It was very interesting to read some days ago the articles of two experienced horsemen with a strong background and a life dedicated to horses and dressage.

The questions they ask are regularly coming around on social networks, but it’s possible to give some answers: “ Do we see horses in the arena with the poll the highest point,” Mr Richard Malmgren asked in his article of 9 May.  The answer is YES, but not as often as we would like, especially if we are sitting on the long side. And when we, the judges, see it, the marks are possibly going higher.

“Are the nostrils in front of the eyes ?” : YES, but not as often as we would like. It’s clear that on the competition arena short necks, heads behind the vertical, are penalized, taking in account the global picture presented, of course. And a horse with this problem can never get a good mark ! On the warming up arena, the FEI Stewards manual is also clear, hyperflexion is not allowed. Some long, deep and low attitude is allowed for a short time, and only if it’s not obtained by force. Furthermore, the number of stewards at the international shows has increased, allowing the control to be efficient. “Is the piaffe on the spot for 12-15 steps ?” : YES, sometimes ! But, again, not as often as we would like. May I add that at the last FEI 5* judges seminar in February 2020 we had an excellent and passionate speech of David Hunt, as head of the JSP (Judges Supervisory Panel), on the good and the bad piaffe, to help us to be stricter on that point …

“Is the walk not that important today ?” : that specific question from Mr Malmgren is understandable. When we see how short the collected walk is in the Grand Prix Special, and in the GP Freestyle. It’s an evolution to make the tests shorter, because compulsory tests are supposed to be boring for the spectators. But these marks have the same weight in the test as it was in the past. It is still a relaxing moment for the horse, and the quality of walk is always mentioned by the masters as essential . This point is regularly discussed – I remember Jean-Michel Roudier presenting judging criteria and differences in marks on collected walk at an other seminar … May be some proposals can be done on that point ?

“What about the overtrack in the extended trot ?”. It’s still required, no problem : if the hind legs are left behind in the extended trot, it is still a clear weakness ! And the parallelism of the canon bones of the front and the hind pairs at trot is looked at. I agree that the “audience at most high level dressage shows is more educated” and that “ideals are not changed” but the sport has changed : more shows, more riders, better horses. It’s the same ideals as in the past, and they are not easier to reach, but there is more competition to arrive at the goals. I believe we can keep passion and hope for the future, because “we as riders, trainers, coaches, judges, officials, veterinarians, all have the responsibility first and foremost to our horses' health and well-being, to our sport of dressage and the art of riding,” as Mr Malmgren said.

The Aesthetic and Human Component

Then Colonel Christian Carde replied on 15 May with other debate: “The technical measurable aspects get discussed while two other essential aspects are forgotten: the aesthetic and human components of a rider’s sense of feeling on a horse." We know that these two points are the reasons why many people start riding.

That is why the future of dressage has now included the Freestyle with music, installed around 30 years ago by Mr Niggli and Mr Bartels. It became implemented at the Olympic Games level 24 years ago (with 31000 spectators attending). This new test represented a big difference to the Tokyo 1964 Olympics ! His artistic side is more and more appreciated, and his technical side allows a lot of new exercises : yes, dressage has changed !

The weaknesses pointed out in the article are not becoming the norm, NO. However we see this more often, because, although it’s as difficult as it was in the past, it’s many more competitors.

What has also changed is that all shows nowadays are really open to the public: the warm up is open, people can take pictures and videos, and the social media are there to control if everybody is doing his job correctly, not to speak of the welfare of the horse attentively being scanned by them.

Because the judging is more and more precise with half-points, statistics, a supervisory panel at the Championships, marks on live scoring sites for the big shows, the media are now more interested in percentages. Records by each horse or each combination are now registered and a first element to communicate. Dressage sport has changed … Maybe we would like to speak more about the technical part, but journalists are more interested with the performances !

Because the judging is a more open job now, with the “safety net” that the JSP represents for the work of the judges at top sport level, our seminars give us the opportunity to study the bias in human judging. It helps judges to work on themselves in order to improve the system. The working group with Mariette Withages and Stephen Clarke published some years ago the Handbook, a fantastic “bible” that makes all judging criteria clearer. And with the strong imput and work of Katrina Wüst, supported by the FEI, a code of points will be announced in the coming months, including a "firewall" for the most important mistakes and for the details of the minor ones on every movement. It will make the judging even more precise.

The sport has developed and scientists have helped with more knowledge on biomechanics, on the way the rider functions, but also on animal psychology and the way horses mentally and physically connect with their riders.

On the other side, cultural heritage of classical riding is still up to date in France, as recognized by UNESCO in 2011. It’s also the case in Austria, through the Lippizan breed and Spanish Riding School in Vienna, included in the Representative List of the Intangible Cultural Heritage of Humanity in 2015. It means that old principles can still be valid if this heritage is still used.

But back to now. Confined riders and their dressage horses have shown during these difficult times videos where they are hacking out or cantering in the forest or on the beaches, where they are doing difficult exercises like one tempi changes or piaffe transitions with reins in one hand and toilet paper in the other, where they are riding without saddle and with just a head collar (only for strong and young riders with brave and comfortable horses). All these short videos shows the good understanding they have and the pleasure to share these moments with their dressage horses. It proves that YES dressage has changed !

But as long as the judges are doing their job with modesty and fairness, with enough knowledge and horsemanship, and with the sense of responsibility that Colonel Nyblaeus explained so well around 40 years ago, the system will be well guided… Because the FEI system supports the education and follow up of the judging, it strengthens the work of judges and makes competition possible with the same rules all over the world. Judging is a fantastic aspect of the sport as long as it involves people who love horses and dressage, and who are passionate to follow the evolution of the sport !