Christian Carde: "What will Equitation of Tomorrow Look Like with the Guardians Looking Away?" 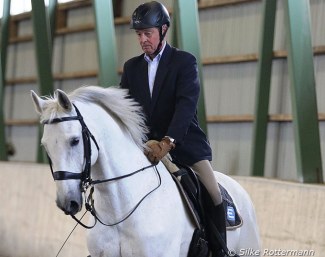 Guest column of this week is by our regular contributor, Colonel Christian Carde.  French born Carde joined the prestigious equestrian institution “Cadre Noir” in 1965. From 1976-1982 he competed internationally in dressage and between 1978 and 1980 he was a member of the French dressage team. Christian Carde won the 1979 French dressage championships. He was the French national dressage team trainer from 1985-1989, the Ecuyer en chef of the Cadre Noir from 1991 until his retirement in 1999 after which he judged a short time internationally. He now spends his retirement training horses and riders in North America and Europe.

Carde read Richard Malmgren: "Question about the Changing Ideals of Dressage Through the Years" and put pen to paper.

What will Equitation of Tomorrow Look Like with the Guardians Looking Away?

It often happens that a video of photo of a movement by a horse-and-rider combination causes animated discussions and clashing convictions on social media. In this online equestrian world, in which neither reason nor objectivity prevail, everybody insists on his / her position without ever having convincingly determined whether the movement was in fact executed in a satisfactory way.

Art or Sport, Feeling or Show

During these discussions mainly the technical, measurable aspect gets discussed, while two other essential aspects are forgotten: the aesthetic and human components of a rider’s sense of feeling on a horse. "Nothing great can be achieved without a bit of love“, says the poet.

If we do not estheticize the movement and do not put sentiment in it, we are without a doubt just doing sports and not equestrian art. The difference shows in the often mechanized way of moving of the horses, I would almost say robotized. These mechanical horses fill their followers with admiration but I only see a performance in the spirit of which the Romans enjoyed circus games. For sure there is a degree of excitement, but it does not reflect the feeling of the rider.

For that reason it is very difficult to bring the debates on social media or in equestrian magazines in agreement. One or the other puts a bit of this and a bit of that in their appreciation, but rarely with the same dosage. It's all simplified to "Like or "Dislike" and who has the last word, without convincing arguments.

But the problem is not limited to online discussions. In dressage competitions at the highest level we put more judges around the arena to have a good conscience... but the ranking of the riders is not more convincing due to it. We expand the evaluation parameter with half points, which makes it even more difficult to harmonize the assessments of the movements through discussions amongst experts. Because how can they be convincing if they argue about an 8 or an 8,5, when it would be easy enough to decide between a 7 or 9?

It is exactly this difficulty to know what is right, which a few days ago led to a passionate person getting reproached on a Facebook page because she dared to express her reservations regarding the quality of a piaffe shown by one of France’s famous dressage riders in a video clip. Numerous "well known" dressage personalities praised that piaffe for its quality in the highest tones. People seem to have forgotten, or not know, what a classical piaffe looks like and how it should be trained on a horse.

Has the Dressage Ideal Changed over 50 Years?

Exactly this uncertainty amongst lovers of dressage, between a good and wrong execution of a movement, was voiced by Swedish Richard Malmgren in a column on Eurodressage. He posed the question why the discipline of dressage has so much changed since the Olympic Games in Tokyo 1964. He recognized that the programmes these Olympians ride have remained more or less unchanges for over 50 years, yet he asked himself whether the improvement of the quality of the horses have prompted trainers to work these talented horses differently. Malmgren quests if the dressage "Ideal" of riders at Tokyo 1964 is still the same nowadays.

He was particularly surprised to see that the poll is no longer the highest point of the neck, the head goes behind the vertical of the ears, there is a lack of engagement of the hindquarters in the trot extensions, the piaffe is not often in place and there is a disappearance of the walk. Ironically all these aspects are considered the contrary of good equitation. However this seems to have become the norm in sport.

The best dressage riders are, if they want it or not, an example that many follow, either consciously or unconsciously. This is not without danger for the discipline and equitation in general, if the concept of good or bad, right and wrong is not clarified by those responsible, and that is the FEI, its judges, the national federations and the Academic Schools, starting with our very own in Saumur. We can all find inspiration in the FEI dressage rule-book, which is excellent in its spirit and wording, but not much known and rarely ever strictly applied.

Is it too naive to believe that a stricter application would provide a turning point? Why not go back to a purer equitation in which the outstanding gaits of modern horses are cultivated by classical principles. This would look spectacular in its own right!

Do I have too much hope that a stricter application would lead to pictures which unify technical perfection with esthetic beauty? Is it reaching too high to assume that if technical aspects and the beauty of expression would merge in more horses, people would get a clearer picture again what of what is right and what is wrong, what is good and what is bad?

Or will we remain in the current state in which neither the sport is giving the clear answers, nor the many classical riding "philosophies" which spring up like mushrooms these days? both regrettably are often more driven by human vanity than achieving true equestrian art. What equitation of tomorrow will look like, only the future will show, but dreaming is always allowed.