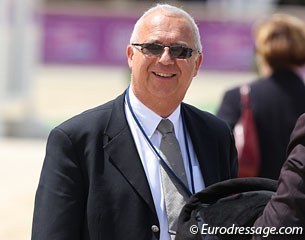 Of course such a proposal is far away of the actual system, and it could only be implemented by the FEI after a long preparation period, similar as the process of reform the French President Macron is starting in my country: first through working groups with all stakeholders concerned in order to exchange and study the ideas and the arguments . A dedicated group with IDOC and AIDEO representatives should also work closely with the JSP and the FEI Dressage Committee before arriving at a solution accepted and voted by FEI. It should be a way to clarify the invitation’s system, and also to help the recently 3* judges or the 4* judges of countries with very few CDIs to be involved. It also could make it more efficient and developed worldwide.

Such an idea is not only a New Year wish of some people like Jan and I, who are involved with international dressage competition for more than 30 years, but it is also a clear concern of stakeholders of some other sports, who couldn’t understand the way the judges are chosen for CDIs (how would you explain if football referees were nominated only by the local organizers). In connection with the improvement of judges’ education and the follow-up of the judges’ work, which we all judges are looking for, it could be an essential change in the coming years for our specialty sport.