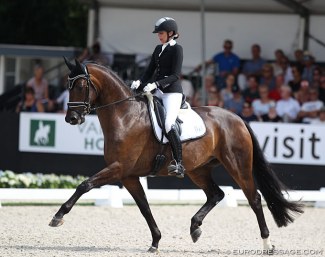 Just Perfect is a 7-year old Danish warmblood gelding by Johnson out of De Winsor (by De Niro x World Cup I), bred by  Stald Lindballe in Denmark.

The horse moved to Andreas Helgstrand's yard as a 4-year old to be developed and sold.

Under Spaniard Severo Jurado Lopez he was 5th at the 2017 Danish Young Horse Championships as a 4-year old.

In 2018 Helgstrand allocated the ride to Australian Simone Pearce so she could represent Australia at the 2018 World Young Horse Championships in Ermelo. The pair finished 14th in the finals after placing third in the consolation.

In the autumn of 2018 it was Hannes Lütt who rode the gelding to a 6th place at the 2018 Danish Young Horse Championships as a 5-year old.

Just Perfect sold to Thomas Ritzinger in Germany. The breeder's name Lindballe was dropped and the horse continued as "Just Perfect".

The horse was first put the horse in training with Ann-Christin Wienkamp, who transformed him into a much sportier, athletic ride. This duo represented Denmark at the 2019 World Young Horse Championships and placed 8th in the Finals for 6-year olds.

Just Perfect recently left Wienkamp's yard in the north of Germany to relocate to Constanze Rügheimer‘s stable and to be further developed by Christiane Mayer-Schwärzler.

"Ann-Christin did great with competing him at the World Championship last year, but I train in Bavaria with Constanze now and want to have Perfect with me. So Christiane will compete him this year and I will start competing him next year at Young Riders level," Sophia Ritzinger told Eurodressage.

Sophie Ritzinger competed at international pony level with Den Ostrik's Dailan, who has now been retired to the field. In 2018 she moved to junior level with Ray Dance and Romano and in 2019 she got Haydn HR and in 20201 Hove's Tatiana followed. This year she has been competing at national S-level and Young Riders in Germany.