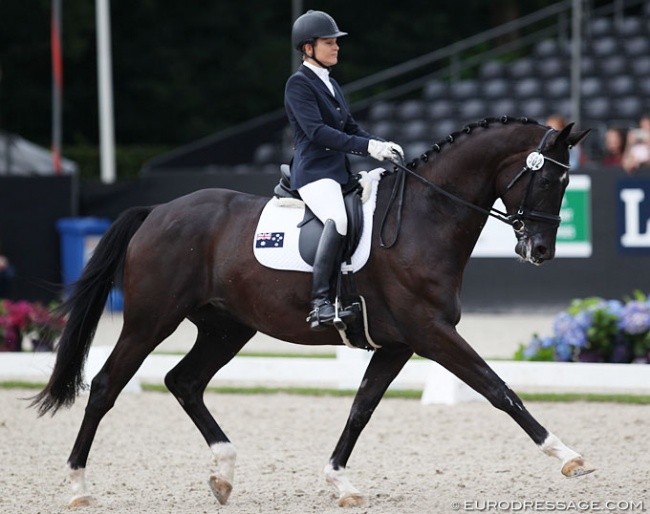 The Australian Equestrian Federation has announced the horse and rider combinations which will represent Australia at the 2018 World Championships for Young Dressage Horses in Ermelo, The Netherlands, on 2 - 5 August 2018.

Australian national selectors have already picked five combinations in their first selection round but more might be added to the final list. Australia is eligible to send two combinations per age division to Ermelo.

Riders are still able to apply for second round offers with applications to be sent in by 23rd June.

The Australian combinations selected are:

For the 27-year-old Denmark-based rider, Simone Pearce, it will be the fourth year in a row she represents Australia at the World Young Horse Championships. Last year, she became the first Australian rider to win a qualifying test at the prestigious event with Feodoro in the six-year-old class.

"I'm absolutely thrilled to have been selected and proud to represent Australia. Last year was absolutely amazing and I'm very enthusiastic to see if we can keep it on the same level and produce some very exciting results again! I'm particularly happy to have Feodoro again this year as a 7-year-old. Last year he produced an awesome performance and this year he's feeling even more ready to hold his own against the strong field. I haven't been riding just perfect for so long so we are still developing together as a combination, but he performed very well at the Danish championships last weekend and I feel he's a tall and impressive horse that really thrives off of the big stage!"

Her fellow Australian rider Rebecca Rooke also represented Australia last year with commendable performances already aboard Muschamp Royal Black in the five-year-old class. "What an honour to be selected to represent Australia at the World Young Horse Championships for the second year running with the same horse. The countdown is on and our preparation will continue. I am really excited."