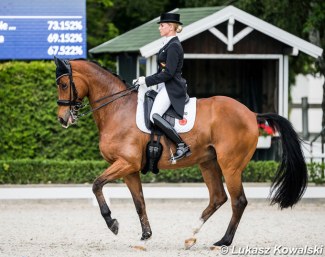 The 2020 CDI-W Mariakalnok in Hungary on 25 - 28 June 2020 was the first international dressage competition since the corona pandemic put a hold on global competition sport.  German Jessica von Bredow-Werndl took the first World Cup victory in this Central European League qualifier since the opening of the borders and relaxation of COVID-19 measures.

Aboard her own 16-year old Dutch warmblood mare Zaire E (by Son de Niro x Jazz), Van Bredow-Werndl turned it into a double. She won the Grand Prix with 77.891% and went on to ace the freestyle on Saturday night under floodlight with 84.890%.

"It is so wonderful to feel how confident Zaire has become," said von Bredow-Werndl about her long-time partner. "Thanks for this indescribable feeling of being one."

Dutch Thamar Zweistra and her employer, Leunis van Lieren's 12-year old KWPN stallion Hexagon's Double Dutch (by Johnson x Rubiquel) achieved a double third. In the Grand Prix with a new personal best score of 73.152% and in the freestyle with 78.750%

Australian Simone Pearce and Gestut Sprehe's 13-year old Hanoverian licensed stallion Destano (by Desperados x Brentano II) began their Olympic campaign for an Australian team spot in Mariakalnok and convinced with solid scores. They posted 71.239% in the Grand Prix and improved that even more in the Special, bringing it to a 73.106% despite a few mistakes in the test.

Helen Langehanenberg is putting more mileage on her rising Grand Prix horse Hollywood, Louise Leatherdale's 13-year old Hanoverian gelding by Herzensdieb x Worldly. They were third in the Grand Prix with 69.891% but dropped to fifth place in the Special with 67.723%.

German youth riders arrived in droves in Mariakalnok as for them the event was an opportunity to gain German team qualification scores and put themselves in the picture for the German team selection trial that will take place mid July in Warendorf.

In the pony division, the 2019 German pony champion Rose Oatley and her 10-year old Rhinelander bred Daddy Moon (by FS Daddy Cool x Capri Moon) won the team test with 77.114% and the individual with 76.649%, but in the freestyle it was Lucie-Anouk Baumgurtel moved into the winner's circle on the 9-year old Nasdasq (by FS Don't Worry) with 80.625%. After committing to junior riders in 2019, the 16-year old double European Pony Champion is playing her cards in the pony division again in 2020, her last in this age division.

In the three Children tests, there were two different winners. Hungarian Sara Solymosi kicked off with the victory in the preliminary test. Aboard the 12-year old Oldenburg bred Asshagay-C (by Diamond Hit x Sepano xx) she scored 73.661%. In the team and individual test Austrian Valeria Bader and the 14-year old Danish warmblood Vemmetofte Roscoe (by Romanov x Stravinsky xx claimed the trophies with 73.975% and 77.454%.

At junior level, German Jana Lang wielded the axe of power with her brand new ride Baron, a 14-year old KWPN gelding by Johnson x Krack C x Catherston Dazzler, which was previously competed by Jasmine Sanche-Burger back in 2015. Lang's very first show on Baron was in fact the international in Mariakalnok and she swept the division winning the team test with 73.697%, the individual test with 73.137% and the Kur with 77.160%

At young riders level, the 2019 European Junior Champion Jana Schrödter was almost able to pull a trifecta. Aboard her new ride Frau Holle, a 12-year old Westfalian mare by Furstenball x Riccio owned by Dressage Pro sport horses, she won the team test with 73.791% and the individual with 73.971%, but dropped to second place in the Kur with 74.458%. The freestyle was won by German Charlotte Ruhl aboard  the 12-year old KWPN gelding Dante (by Tuschinski x Havidoff), a horse she took over from brother Johannes. Ruhl won the Kur with 74.667%.

The Under 25 division in Mariakalnok included only two classes with three riders in total. They were dominated by local hero, Hungarian Benedek Pachl on his long-time partner, the 12-year old Bavarian mare Donna Frederika (by Don Frederico x Don Rico). He won the Inter II with 67.821% and the Kur with 71.320%