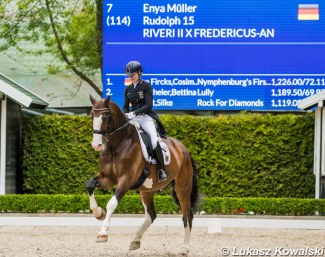 The 2020 CDI Mariakalnok on 26 - 28 June will be the first international dressage competition since the corona lockdown brought all sport competitions to a halt.

The Hungarian international, which offers classes from ponies to Grand Prix, boasts an impressive field of starters with a total of 160 combinations entered.

The same weekend, international competition will also start in Italy with the CDI-PCHJYR Arezzo for youth riders. Italy has dropped the minimum criteria to compete in a CDI on home turf from 64% to 61%.

The CDI-W Mariakalnok will offer the first World Cup qualifying event for the 2021 Finals, post corona.

After fracturing her arm in January, Irish Anna Merveldt is back in action and will compete the Lusitano Esporim. Russian Elena Sidneva will be putting mileage on her 8-year old Sacura at Grand Prix level after she sold her 2019 Russian team horse Fuhur to Denmark.

Australian Simone Pearce will begin her Olympic campaign on Destano in the CDI 3* division, just like Luxembourg's Nicolas Wagner on Quater Back Junior.

Talking about debuts, or let's say come backs. German Olympic medal winner Ulla Salzgeber is returning to the CDI ring after a 3-year break from international competition. She's on the starters' list with Liberte, an 8-year old Hanoverian by Londontime x Accord.

In the youth divisions, it stands out how many of the German A-squad riders, especially pony and junior riders, are traveling to Hungary for this show. German Pony Champion Rose Oatley, the Baumgurtel sisters, and team riders Shona Benner and Antonia Busch-Kuffner will there there.