Escudo, Hanoverian Stallion of the Year 2009, Passed Away 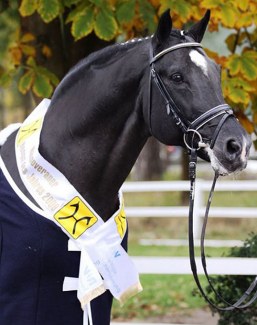 Escudo I, a Celle state stud owned licensed stallion and Hanoverian of the Year 2009, has passed away at age 29. He died in the field.

Escudo was by Espri x Arkansas x Woermann and bred by the late Allmer Knoop in Loxstedt, Germany.

Reared by Heinz Katt, the black stallion moved to a box at the State Stud Celle after his licensing in 1993. One year later, he won his stallion performance test and was awarded the Freiherr von Stenglin Prize for the best young stallion of the vintage.

Under Joachim Winter, Escudo won the Hanoverian Jumping Horse Championships in 1996 and was celebrated as reserve Bundeschampion in Warendorf. He crowned his sporting career with victories and placings up to S-level.

Escudo enjoyed great popularity amongst breeders. 15 of his sons are registered in the stallion book I of the Hannoveraner Verband. His most famous offspring is Embassy. His full brother Embassy II was an internationally highly successful show jumper with Germany's Hans-Dieter Dreher.  Escudo sired 104 daughters that were awarded State Premium.

With high breeding values in jumping, Escudo was Hannoveraner Stallion of the Year in 2009.